Clues on the Origin and Evolution of Massive Contact Binaries: Atmosphere Analysis of VFTS 352

The massive O4.5 V + O5.5 V binary VFTS 352 in the Tarantula Nebula is one of the shortest-period and most massive overcontact binaries known. Recent theoretical studies indicate that some of these systems could ultimately lead to the formation of gravitational waves via black hole binary mergers through the chemically homogeneous evolution pathway. By analyzing ultraviolet-optical phase-resolved spectroscopic data, we aim to constrain atmospheric and wind properties that could be later used to confront theoretical predictions from binary evolution. In particular, surface abundances are powerful diagnostics of the evolutionary status, mass transfer, and internal mixing processes. From a set of 32 Very Large Telescope/FLAMES visual and eight Hubble Space Telescope/Cosmic Origins Spectrograph ultraviolet spectra, we used spectral disentangling to separate the primary and secondary components. Using a genetic algorithm wrapped around the NLTE model atmosphere and the spectral synthesis code FASTWIND, we perform an 11-parameter optimization to derive the atmospheric and wind parameters of both components, including the surface abundances of He, C, N, O, and Si. We find that both components are hotter than expected compared to single-star evolutionary models, indicating that additional mixing processes may be at play. However, the derived chemical abundances do not show significant indications of mixing when adopting baseline values typical of the system environment. 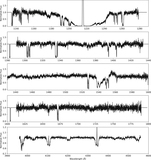