We present the first large set of all-sky synthetic dust polarization maps derived directly from a self-consistent magnetohydrodynamics simulation using the TIGRESS framework. Turbulence in this simulation is predominantly driven by supernova explosions, with rates that are self-consistently regulated by feedback loops. The simulation covers both the outer scale and inertial range of turbulence with uniformly high resolution. The shearing-box utilized in the simulation, in concert with resolved supernova-driven turbulence, enables the capturing of generation, growth, and saturation of both turbulent and mean magnetic fields. We construct polarization maps at 353 GHz, as seen by observers inside a model of the multiphase, turbulent, magnetized interstellar medium (ISM). To fully sample the simulated ISM state, we use 350 snapshots spanning over ∼ 350 {Myr} (more than six feedback loops) and nine representative observers. The synthetic skies show a prevalent E/B power asymmetry ({EE}> {BB}) and positive TE correlation in broad agreement with observations by the Planck satellite. However, the ranges of {EE}/{BB}∼ 1.4{--}1.7 and {TE}/{({TT}\cdot {EE})}1/2∼ 0.2{--}0.3 are generally lower than those measured by Planck. We find large fluctuations of E/B asymmetry and TE correlation depending on the observer’s position and temporal fluctuations of ISM properties due to bursts of star formation. The synthetic maps are made publicly available to provide novel models of the microwave sky. 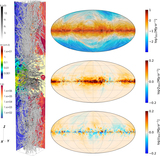