Rising from Ashes or Dying Flash? The Mega Outburst of Small Comet 289P/Blanpain in 2013

Jupiter-family comet 289P/Blanpain was first discovered in 1819 and was then lost for ∼200 years, only to be rediscovered in 2003 as a small, weakly active comet. The comet is associated with the Phoenicids, an otherwise minor meteor shower that produced significant outbursts in 1956 and 2014. The shower points to the existence of significant mass-loss events of P/Blanpain in recent history. P/Blanpain was recovered during an apparent large outburst in 2013 July at an appreciable heliocentric distance of 3.9 au, with brightness increase of 9 mag, making it one of the largest comet outbursts ever observed. Here we present an analysis of archival data taken by several telescopes. We find that the 2013 outburst has produced ∼108 kg of dust, which accounts for a modest fraction (∼1%) of the mass of P/Blanpain’s nucleus as measured in 2004. Based on analysis of long-term light curve and modeling of coma morphology, we conclude that the 2013 outburst was most likely driven by the crystallization of amorphous water ice triggered by a spin-up disruption of the nucleus. A dust dynamical model shows that a small fraction of the dust ejecta will reach the Earth in 2036 and 2041, but are only expected to produce minor enhancements to the Phoenicid meteor shower. The 2013 outburst of P/Blanpain, though remarkable for a comet of small size, does not necessary imply a catastrophic disruption of the nucleus. The upcoming close encounter of P/Blanpain in 2020 January will provide an opportunity to examine the current state of the comet. 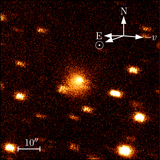