This Letter reports the discovery of spatially extended line-emitting nebula, reaching to ≈100 physical kpc (pkpc) from a damped {Ly}α absorber (DLA) at z DLA = 0.313 along the sightline toward quasi-stellar object (QSO) PKS 1127-145 (z QSO = 1.188). This DLA was known to be associated with a galaxy group of dynamical mass M group ∼ 3 × 1012 M ⊙, but its physical origin remained ambiguous. New wide-field integral field observations revealed a giant nebula detected in [O II], Hβ, [O III], Hα, and [N II] emission, with the line-emitting gas following closely the motions of group galaxies. One of the denser streams passes directly in front of the QSO with kinematics that are consistent with the absorption profiles recorded in the QSO echelle spectra. The emission morphology, kinematics, and line ratios of the nebula suggest that shocks and turbulent mixing layers, produced as a result of stripped gaseous streams moving at supersonic speed across the ambient hot medium, contribute significantly to the ionization of the gas. While the DLA may not be associated with any specific detected member of the group, both the kinematic and dust properties are consistent with the DLA originating in streams of gas stripped from sub-L * group members at ≲25 pkpc from the QSO sightline. This study demonstrates that gas stripping in low-mass galaxy groups is effective in releasing metal-enriched gas from star-forming regions, producing absorption systems in QSO spectra, and that combining absorption and emission-line observations provides an exciting new opportunity for studying gas and galaxy co-evolution. 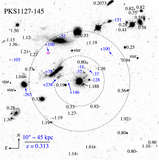