Stars in galaxies form from the cold rotationally supported gaseous disks that settle at the center of dark matter halos. In the simplest models, such angular momentum is acquired early on at the time of collapse of the halo and preserved thereafter, implying a well-aligned spin for the stellar and gaseous component. Observations, however, have shown the presence of gaseous disks in counterrotation with the stars. We use the Illustris numerical simulations to study the origin of such counterrotation in low-mass galaxies (M ⋆ = 2 × 109-5 × 1010 M ⊙), a sample where mergers have not played a significant role. Only ∼1% of our sample shows a counterrotating gaseous disk at z = 0. These counterrotating disks arise in galaxies that have had a significant episode of gas removal followed by the acquisition of new gas with misaligned angular momentum. In our simulations, we identify two main channels responsible for the gas loss: a strong feedback burst and gas stripping during a flyby passage through a more massive group environment. Once settled, counterrotation can be long-lived with several galaxies in our sample displaying misaligned components consistently for more than 2 Gyr. As a result, no major correlation with the present-day environment or structural properties might remain, except for a slight preference for early-type morphologies and a lower than average gas content at a given stellar mass. 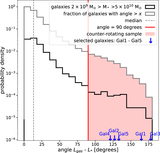