We present observations of the Trumpler 14/Carina I region carried out using the Stratospheric Terahertz Observatory 2. The Trumpler 14/Carina I region is in the western part of the Carina Nebula Complex (CNC), which is one of the most extreme star-forming regions in the Milky Way. We observed Trumpler 14/Carina I in the 158 μm transition of [C II] with a spatial resolution of 48″ and a velocity resolution of 0.17 km s-1. The observations cover a 0.°25 by 0.°28 area with central position l = 297.°34, b = -0.°60. The kinematics show that bright [C II] structures are spatially and spectrally correlated with the surfaces of CO clouds, tracing the photodissociation region (PDR) and ionization front of each molecular cloud. Along seven lines of sight (LOSs) that traverse Tr 14 into the dark ridge to the southwest, we find that the [C II] luminosity from the H II region is 3.7 times that from the PDR. In the same LOS, we find in the PDRs an average ratio of 1 : 4.1 : 5.6 for the mass in atomic gas : dark CO gas : molecular gas traced by CO. Comparing multiple gas tracers, including H I 21 cm, [C II], CO, and radio recombination lines, we find that the H II regions of the CNC are well described as H II regions with one side freely expanding toward us, consistent with the Champagne model of ionized gas evolution. The dispersal of the GMC in this region is dominated by EUV photoevaporation; the dispersal timescale is 20-30 Myr. 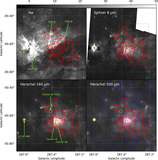