CO is thought to be the main reservoir of volatile carbon in protoplanetary disks, and thus the primary initial source of carbon in the atmospheres of forming giant planets. However, recent observations of protoplanetary disks point toward low volatile carbon abundances in many systems, including at radii interior to the CO snowline. One potential explanation is that gas phase carbon is chemically reprocessed into less volatile species, which are frozen on dust grain surfaces as ice. This mechanism has the potential to change the primordial C/H ratio in the gas. However, current observations primarily probe the upper layers of the disk. It is not clear if the low volatile carbon abundances extend to the midplane, where planets form. We have run a grid of 198 chemical models, exploring how the chemical reprocessing of CO depends on disk mass, dust grain size distribution, temperature, cosmic-ray and X-ray ionization rate, and initial water abundance. Building on our previous work focusing on the warm molecular layer, here we analyze the results for our grid of models in the disk midplane at 12 au. We find that either an ISM level cosmic-ray ionization rate or the presence of UV photons due to a low dust surface density are needed to chemically reduce the midplane CO gas abundance by at least an order of magnitude within 1 Myr. In the majority of our models CO does not undergo substantial reprocessing by in situ chemistry and there is little change in the gas phase C/H and C/O ratios over the lifetime of the typical disk. However, in the small subset of disks where the disk midplane is subject to a source of ionization or photolysis, the gas phase C/O ratio increases by up to nearly 9 orders of magnitude due to conversion of CO into volatile hydrocarbons. 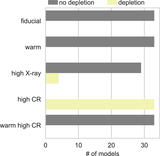