The Breakthrough Starshot project aims to send centimeter-sized, gram-scale “StarChip” probes to Alpha Centauri at a speed of ∼0.2 c. On the other hand, Zhang & Li recently proposed that transrelativistic cameras may be sent to any direction to study astronomical objects and test special relativity. To conduct such “relativistic astronomy,” one needs to solve the motion of the probe in flight. We solve the motion of the probe (including the moving direction and the velocity) by comparing the positions of three or more point sources observed in the Earth rest frame and in the probe’s comoving frame. When the positions of enough point sources are taken into account, the motion of the probe can be solved with an error that is even smaller than the diffraction limit of the transrelativistic camera. After solving the motion, when the measurement of the position of an additional point source is introduced, one can use the data to test the light aberration effect in special relativity. The upper limit of the photon mass can be placed from the deviation of aberration to slightly lower than the energy of the photon, e.g., ∼1 eV. 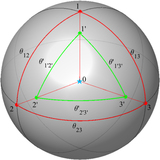