Moving magnetic features (MMFs) are small magnetic elements moving almost radially away from sunspots toward the boundary of moat regions. They are mostly seen during the decay phase of a sunspot. Here we present a high-resolution observation of MMFs around a sunspot in NOAA AR 12565 on 2016 July 14 using the the 1.6 m Goode Solar Telescope (GST) at Big Bear Solar Observatory. The spectropolarimetric measurements of photospheric magnetic field are obtained from GST’s newly commissioned Near Infra-Red Imaging Spectropolarimeter at the Fe I 1.56 μm line. The statistical study of physical properties of identified fine-scale MMFs (i.e., size, lifetime, inclination, horizontal velocity, and flux) is presented. The origin of the minority polarity flux in the sunspot is determined. Same as the majority polarity flux, the minority polarity flux can originate from mid-penumbra with highly inclined fields. The role of MMFs in both polarities in the flux evolution of the sunspot is speculated, as they can both contribute to the sunspot evolution. 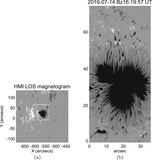