Three-dimensional Simulations of Massive Stars. I. Wave Generation and Propagation

We present the first three-dimensional (3D), hydrodynamic simulations of the core convection zone (CZ) and extended radiative zone spanning from 1% to 90% of the stellar radius of an intermediate-mass (3 {M}⊙ ) star. This allows us to self-consistently follow the generation of internal gravity waves (IGWs) at the convective boundary and their propagation to the surface. We find that convection in the core is dominated by plumes. The frequency spectrum in the CZ and that of IGW generation is a double power law, as seen in previous two-dimensional (2D) simulations. The spectrum is significantly flatter than theoretical predictions using excitation through Reynolds stresses induced by convective eddies alone. It is compatible with excitation through plume penetration. An empirically determined distribution of plume frequencies generally matches the one necessary to explain a large part of the observed spectrum. We observe waves propagating in the radiation zone and excited standing modes, which can be identified as gravity and fundamental modes. They show similar frequencies and node patterns to those predicted by the stellar oscillation code GYRE. The continuous part of the spectrum fulfills the IGW dispersion relation. A spectrum of tangential velocity and temperature fluctuations close to the surface is extracted, which is directly related to observable brightness variations in stars. Unlike 2D simulations, we do not see the high frequencies associated with wave breaking, likely because the 3D simulations presented in this paper are more heavily damped. 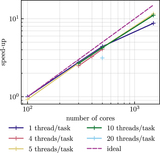