A New, Larger Sample of Supernova Remnants in NGC 6946

The relatively nearby spiral galaxy NGC 6946 is one of the most actively star-forming galaxies in the local universe. Ten supernovae (SNe) have been observed since 1917, and hence NGC 6946 surely contains a large number of supernova remnants (SNRs). Here we report a new optical search for these SNRs using narrowband images obtained with the WIYN telescope. We identify 147 emission nebulae as likely SNRs, based on elevated [S II]:Hα ratios compared to H II regions. We have obtained spectra of 102 of these nebulae with Gemini North-GMOS of these, 89 have [S II]:Hα ratios greater than 0.4, the canonical optical criterion for identifying SNRs. There is very little overlap between our sample and the SNR candidates identified by Lacey et al. from radio data. Also, very few of our SNR candidates are known X-ray sources, unlike the situation in some other galaxies such as M33 and M83. The emission-line ratios, e.g., [N II]:Hα, of the candidates in NGC 6946 are typical of those observed in SNR samples from other galaxies with comparable metallicity. None of the candidates observed in our low-resolution spectra show evidence of anomalous abundances or significant velocity broadening. A search for emission at the sites of all the historical SNe in NGC 6946 resulted in detections for only two: SN 1980K and SN 2004et. Spectra of both show very broad, asymmetric line profiles, consistent with the interaction between SN ejecta and the progenitor star’s circumstellar material, as seen in late spectra from other core-collapse SNe of similar age. 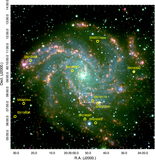