The small class of known stars with unusually warm, dusty debris disks is a key sample to probe in order to understand cascade models and the extreme collisions that likely lead to the final configurations of planetary systems. Because of its extreme dustiness and small radius, the disk of BD +20 307 has a short predicted collision time and is therefore an interesting target in which to look for changes in dust quantity and composition over time. To compare with previous ground and Spitzer Space Telescope data, Stratospheric Observatory for Infrared Astronomy (SOFIA) photometry and spectroscopy were obtained. The system’s 8.8-12.5 μm infrared emission increased by 10 ± 2% over nine years between the SOFIA and earlier Spitzer measurements. In addition to an overall increase in infrared excess, there is a suggestion of a greater increase in flux at shorter wavelengths (less than 10.6 μm) compared to longer wavelengths (greater than 10.6 μm). Steady-state collisional cascade models cannot explain the increase in BD +20 307's disk flux over such short timescales. A catastrophic collision between planetary-scale bodies is still the most likely origin for the system’s extreme dust; however, the cause for its recent variation requires further investigation. 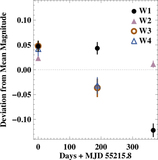