The Galactic Center: An Improved Astrometric Reference Frame for Stellar Orbits around the Supermassive Black Hole

Precision measurements of the stars in short-period orbits around the supermassive black hole at the Galactic Center are now being used to constrain general relativistic effects, such as the gravitational redshift and periapse precession. One of the largest systematic uncertainties in the measured orbits has been errors in the astrometric reference frame, which is derived from seven infrared-bright stars associated with SiO masers that have extremely accurate radio positions, measured in the Sgr A*-rest frame. We have improved the astrometric reference frame within 14″ of the Galactic Center by a factor of 2.5 in position and a factor of 5 in proper motion. In the new reference frame, Sgr A* is localized to within a position of 0.645 mas and proper motion of 0.03 mas yr-1. We have removed a substantial rotation (2.°25 per decade), that was present in the previous less-accurate reference frame used to measure stellar orbits in the field. With our improved methods and continued monitoring of the masers, we predict that orbital precession predicted by general relativity will become detectable in the next ∼5 yr. 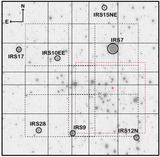