In a dynamically relaxed cluster around a massive black hole a dense stellar cusp of old stars is expected to form. Previous observations showed a relative paucity of red giant stars within the central 0.5 pc in the Galactic Center. By co-adding spectroscopic observations taken over a decade, we identify new late-type stars, including the first five warm giants (G2-G8III), within the central 1 arcsec2 (0.04 × 0.04 pc2) of the Galaxy. Our findings increase the number of late-type stars to 21, of which we present deep spectra for 16. The updated star count, based on individual spectral classification, is used to reconstruct the surface density profile of giant stars. Our study, for the first time, finds a cusp in the surface number density of the spectroscopically identified old (>3 Gyr) giants population (m K < 17) within 0.02-0.4 pc described by a single power law with an exponent Γ = 0.34 ± 0.04. 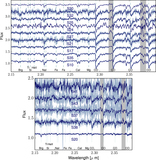