A tightly correlated star formation rate (SFR)-stellar mass relation of star-forming galaxies, or star-forming sequence (SFS), is a key feature in galaxy property-space that is predicted by modern galaxy formation models. We present a flexible data-driven approach for identifying this SFS over a wide range of SFRs and stellar masses using Gaussian mixture modeling (GMM). Using this method, we present a consistent comparison of the z = 0 SFSs of central galaxies in the Illustris, Evolution and Assembly of GaLaxies and their Environment, and MUFASA hydrodynamic simulations and the Santa Cruz semianalytic model (SC-SAM), alongside data from the Sloan Digital Sky Survey. We find, surprisingly, that the amplitude of the SFS varies by up to ∼0.7 dex (factor of ∼5) among the simulations with power-law slopes ranging from 0.7 to 1.2. In addition to the SFS, our GMM method also identifies subcomponents in the SFR-stellar mass plane corresponding to starburst, transitioning, and quiescent subpopulations. The hydrodynamic simulations are similarly dominated by SFS and quiescent subpopulations unlike the SC-SAM, which predicts substantial fractions of transitioning and starburst galaxies at stellar masses above and below {10}10 {M}⊙ , respectively. All of the simulations also produce an abundance of low mass quiescent central galaxies in apparent tension with observations. These results illustrate that, even among models that well reproduce many observables of the galaxy population, the z = 0 SFS and other subpopulations still show marked differences that can provide strong constraints on galaxy formation models. 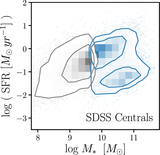