Internal mixing on the giant branch is an important process which affects the evolution of stars and the chemical evolution of the galaxy. While several mechanisms have been proposed to explain this mixing, better empirical constraints are necessary. Here, we use [C/N] abundances in 26,097 evolved stars from the SDSS-IV/APOGEE-2 Data Release 14 to trace mixing and extra mixing in old field giants with -1.7 < [Fe/H] < 0.1. We show that the APOGEE [C/N] ratios before any dredge-up occurs are metallicity dependent, but that the change in [C/N] at the first dredge-up is metallicity independent for stars above [Fe/H] ∼ -1. We identify the position of the red giant branch (RGB) bump as a function of metallicity, note that a metallicity-dependent extra mixing episode takes place for low-metallicity stars ([Fe/H] < -0.4) 0.14 dex in log g above the bump, and confirm that this extra mixing is stronger at low metallicity, reaching Δ[C/N] = 0.58 dex at [Fe/H] = -1.4. We show evidence for further extra mixing on the upper giant branch, well above the bump, among the stars with [Fe/H] < -1.0. This upper giant branch mixing is stronger in the more metal-poor stars, reaching 0.38 dex in [C/N] for each 1.0 dex in log g. The APOGEE [C/N] ratios for red clump (RC) stars are significantly higher than for stars at the tip of the RGB, suggesting additional mixing processes occur during the helium flash or that unknown abundance zero points for C and N may exist among the RC sample. Finally, because of extra mixing, we note that current empirical calibrations between [C/N] ratios and ages cannot be naively extrapolated for use in low-metallicity stars specifically for those above the bump in the luminosity function. 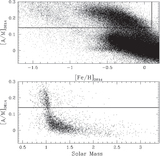