Apparently similar but multifaceted photometric systems are currently being used to investigate the multiple stellar populations in globular clusters (GCs), without the concrete general agreement on the definition of the multiple populations. In recent years, an attractive idea of utilization of the widely used UBI photometry, C UBI , for the populational tagging of the giant stars in GCs has emerged. We perform a critical analysis of the {{cn}}JWL} and C UBI indices, finding that the populational tagging from the C UBI index may not be reliable, due to the inherited trait of the broadband photometry. As a consequence, the populational number ratios and the cumulative radial distributions from the C UBI index can be easily in error. The results for M3, which shows a very strong radial gradient in the populational number ratio, highlight the strengths of our {{cn}}JWL} index: both the Hubble Space Telescope imaging and the ground-based spectroscopy failed to grasp the correct picture, which can be easily achieved with our {{cn}}JWL} index with small-aperture ground-based telescopes, due to the small field of view or crowdedness in the central part of the cluster. 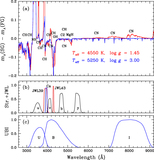