We develop a framework for a new definition of the Galactic midplane, allowing for tilt ({θ }tilt}; rotation about Galactic azimuth 90°) and roll ({θ }roll}; rotation about Galactic azimuth 0°) of the midplane with respect to the current definition. Derivation of the tilt and roll angles also determines the solar height above the midplane. Here we use nebulae from the Wide-field Infrared Survey Explorer (WISE) Catalog of Galactic H II Regions to define the Galactic high-mass star formation (HMSF) midplane. We analyze various subsamples of the WISE catalog and find that all have Galactic latitude scale heights near 0.°30 and z-distribution scale heights near 30 {pc}. The vertical distribution for small (presumably young) H II regions is narrower than that of larger (presumably old) H II regions (∼25 {pc} versus ∼40 {pc}), implying that the larger regions have migrated further from their birth sites. For all H II region subsamples and for a variety of fitting methodologies, we find that the HMSF midplane is not significantly tilted or rolled with respect to the currently defined midplane, and, therefore, the Sun is near to the HMSF midplane. These results are consistent with other studies of HMSF, but are inconsistent with many stellar studies, perhaps because of asymmetries in the stellar distribution near the Sun. Our results are sensitive to latitude restrictions and also to the completeness of the sample, indicating that similar analyses cannot be done accurately with less complete samples. The midplane framework we develop can be used for any future sample of Galactic objects to redefine the midplane. 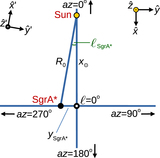