We examine a sample of 2301 gamma-ray bursts, detected by Konus-Wind in the triggered mode between 1994 and 2017 and localized by the interplanetary network (IPN), for evidence of gravitational lensing. We utilize all the available gamma-ray burst (GRB) data: time histories, localizations, and energy spectra. We employ common IPN techniques to find and quantify similarities in the light curves of 2,646,150 burst pairs, and for the pairs with significant similarities, we examine their IPN localizations to determine whether they are consistent with a common origin. For pairs that are consistent, we derive and compare energy spectra, and compute a figure of merit that allows us to compare and rank burst pairs. We conduct both a blind search, between all possible burst pairs, and a targeted search, between pairs in which one burst has both a spectroscopic redshift and an identification of an intervening system, as measured by one or more lower spectroscopic redshifts. We identify six pairs in the blind search that could be taken as evidence for lensing, but none are compelling enough to claim a detection with good confidence. No candidates were detected in the targeted search. For our GRB sample, we set an upper limit to the optical depth to lensing of 0.0033, which is comparable to that of optical sources. We conclude that proposed scenarios in which a large fraction of the GRB population is lensed are extremely unlikely. 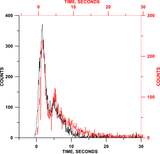