We present the first galaxy-O VI absorption kinematic study for 20 absorption systems (EW > 0.1 Å) associated with isolated galaxies (0.15 ≤ z ≤ 0.55) that have accurate redshifts and rotation curves obtained using Keck/ESI. Our sample is split into two azimuthal angle bins: major axis (Φ < 25°) and minor axis (Φ > 33°). O VI absorption along the galaxy major axis is not correlated with galaxy rotation kinematics, with only 1/10 of systems that could be explained with rotation/accretion models. This is in contrast to corotation commonly observed for Mg II absorption. O VI along the minor axis could be modeled by accelerating outflows, but only for small opening angles, while the majority of the O VI is decelerating. Along both axes, stacked O VI profiles reside at the galaxy systemic velocity with the absorption kinematics spanning the entire dynamical range of their galaxies. The O VI found in AMR cosmological simulations exists within filaments and in halos of ∼50 kpc surrounding galaxies. Simulations show that major-axis O VI gas inflows along filaments and decelerates as it approaches the galaxy, while increasing in its level of corotation. Minor-axis outflows in the simulations are effective within 50-75 kpc beyond that they decelerate and fall back onto the galaxy. Although the simulations show clear O VI kinematic signatures, they are not directly comparable to observations. When we compare kinematic signatures integrated through the entire simulated galaxy halo, we find that these signatures are washed out owing to full velocity distribution of O VI throughout the halo. We conclude that O VI alone does not serve as a useful kinematic indicator of gas accretion, outflows, or star formation and likely best probes the halo virial temperature. 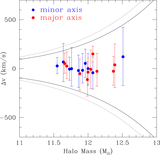