Cosmological Interpretation of the Color-Magnitude Diagrams of Galaxy Clusters

We investigate the color-magnitude diagram (CMD) of cluster galaxies in the hierarchical Λ-CDM cosmological scenario using both single stellar populations (SSPs) and simple galaxy models. First, we analyze the effect of bursts and mergers and companion chemical pollution and rejuvenation of the stellar content on the integrated light emitted by galaxies. The dispersion of the galaxy magnitudes and colors on the M V - (B - V) plane is mainly due to mixing of ages and metallicities of the stellar populations, with mergers weighting more than bursts of similar mass fractions. The analysis is made using the Monte Carlo technique applied to ideal model galaxies reduced to SSPs with galaxy-size mass to evaluate mass, age, and metallicity of each object. We show that separately determining the contributions by bursts and mergers leads to a better understanding of the observed properties of the CMDs of cluster galaxies. Then we repeat the analysis using suitable chemophotometric models of galaxies whose mass is derived from the cosmological predictions of the galaxy content of typical clusters. Using the halo mass function and the Monte Carlo technique, we derive the formation redshift of each galaxy and its photometric history. These are used to simulate the CMD of the cluster galaxies. The main conclusion is that most massive galaxies have acquired the red color they show today in very early epochs and remained the same ever since. The simulations nicely reproduce the red sequence, green valley, and blue cloud, the three main regions of the CMD in which galaxies crowd. 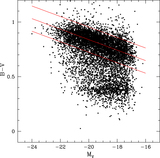