Super Metal-rich Stars in the LAMOST Survey: A Test on Radial Migration

Super metal-rich stars with [Fe/H] > 0.4 are selected from LAMOST DR6, and two groups, the blue and the red, are found in the T eff versus logg diagram with a temperature gap between them. In combination with Gaia DR2, stellar positions, velocities, and orbits are calculated, and spatial distributions, kinematical properties, and orbital parameters are compared between the two groups. The blue group shows mainly thin-disk kinematics and spans a wide R range of 6─12 kpc, while the red group has both the thin-disk and the thick-disk kinematics with a narrower range of R = 6─10 kpc. The kinematical and orbital parameters of stars in the blue group indicate that they could belong to the young population with age less than 1 Gyr, rather than blue stragglers of the old population. The orbital parameters, R p , R a , and R g , of the red group with the thick-disk kinematics are smaller than those with the thin-disk kinematics. The distributions of birth radius and migration distance indicate that radial migration is a favorable origin for the red group, especially those with the thick-disk kinematics, but not for the blue group. The relative magnitude of radial migration is of 51% for the whole sample and of 64% for the red group only. The corotation radial migration caused by the bars and spiral arms at resonances is the most likely mechanism for explaining these properties of SMR stars in this work. 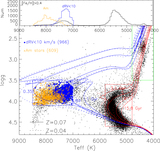