We present new 3.6 and 4.5 μm secondary eclipse measurements for five cool (T ≲ 1000 K) transiting gas giant planets: HAT-P-15b, HAT-P-17b, HAT-P-18b, HAT-P-26b, and WASP-69b. We detect eclipses in at least one bandpass for all planets except HAT-P-15b. We confirm and refine the orbital eccentricity of HAT-P-17b, which is also the only planet in our sample with a known outer companion. We compare our measured eclipse depths in these two bands, which are sensitive to the relative abundances of methane versus carbon monoxide and carbon dioxide, respectively, to predictions from 1D atmosphere models for each planet. For planets with hydrogen-dominated atmospheres and equilibrium temperatures cooler than ∼1000 K, this ratio should vary as a function of both atmospheric metallicity and the carbon-to-oxygen ratio. For HAT-P-26b, our observations are in good agreement with the low atmospheric metallicity inferred from transmission spectroscopy. We find that all four of the planets with detected eclipses are best matched by models with relatively efficient circulation of energy to the nightside. We see no evidence for a solar-system-like correlation between planet mass and atmospheric metallicity, but instead identify a potential (1.9σ) correlation between the inferred CH4/(CO + CO2) ratio and stellar metallicity. Our ability to characterize this potential trend is limited by the relatively large uncertainties in the stellar metallicity values. Our observations provide a first look at the brightness of these planets at wavelengths accessible to the James Webb Space Telescope, which will be able to resolve individual CH4, CO, and CO2 bands and provide much stronger constraints on their atmospheric compositions. 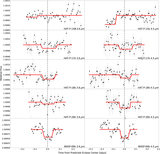