Resonant dynamics plays a significant role in the past evolution and current state of our outer solar system. The population ratios and spatial distribution of Neptune’s resonant populations are direct clues to understanding the history of our planetary system. The orbital structure of the objects in Neptune’s 2:1 mean-motion resonance (“twotinos”) has the potential to be a tracer of planetary migration processes. Different migration processes produce distinct architectures, recognizable by well-characterized surveys. However, previous characterized surveys only discovered a few twotinos, making it impossible to model the intrinsic twotino population. With a well-designed cadence and nearly 100% tracking success, the Outer Solar System Origins Survey (OSSOS) discovered 838 trans-Neptunian objects, of which 34 are securely twotinos with well-constrained libration angles and amplitudes. We use the OSSOS twotinos and the survey characterization parameters via the OSSOS survey simulator to inspect the intrinsic population and orbital distributions of twotinos. The estimated twotino population, {4400}-1100+1500 with H r < 8.66 (diameter ∼100 km) at 95% confidence, is consistent with the previous low-precision estimate. We also constrain the width of the inclination distribution to a relatively narrow value of {σ }i={6}-1^\circ +1 and find that the eccentricity distribution is consistent with a Gaussian centered on e c = 0.275 with a width e w = 0.06. We find a single-slope exponential luminosity function with α = 0.6 for the twotinos. Finally, for the first time, we meaningfully constrain the fraction of symmetric twotinos and the ratio of the leading asymmetric islands; both fractions are in the range of 0.2-0.6. These measurements rule out certain theoretical models of Neptune’s migration history. 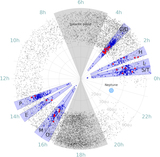