We report two microlensing planet candidates discovered by the Korea Microlensing Telescope Network (KMTNet) survey in 2017. However, both events have the 2L1S/1L2S degeneracy, which is an obstacle to claiming the discovery of the planets with certainty unless the degeneracy can be resolved. For KMT-2017-BLG-0962, the degeneracy cannot be resolved. If the 2L1S solution is correct, KMT-2017-BLG-0962 might be produced by a super Jupiter-mass planet orbiting a mid-M-dwarf host star. For KMT-2017-BLG-1119, the light-curve modeling favors the 2L1S solution but higher-resolution observations of the baseline object tend to support the 1L2S interpretation rather than the planetary interpretation. This degeneracy might be resolved by a future measurement of the lens-source relative proper motion. This study shows that the problem of resolving 2L1S/1L2S degeneracy exists over a much wider range of conditions than those considered by the theoretical study of Gaudi (1998). 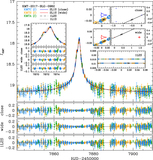