Identification of a Minimoon Fireball

Objects gravitationally captured by the Earth-Moon system are commonly called temporarily captured orbiters (TCOs), natural Earth satellites, or minimoons. TCOs are a crucially important subpopulation of near-Earth objects (NEOs) to understand because they are the easiest targets for future sample-return, redirection, or asteroid mining missions. Only one TCO has ever been observed telescopically, 2006 RH 120, and it orbited Earth for about 11 months. Additionally, only one TCO fireball has ever been observed prior to this study. We present our observations of an extremely slow fireball (codename DN160822_03) with an initial velocity of around 11.0 km s-1 that was detected by six of the high-resolution digital fireball observatories located in the South Australian region of the Desert Fireball Network. Due to the inherent dynamics of the system, the probability of the meteoroid being temporarily captured before impact is extremely sensitive to its’ initial velocity. We examine the sensitivity of the fireball’s orbital history to the chosen triangulation method. We use the numerical integrator REBOUND to assess particle histories and assess the statistical origin of DN160822_03. From our integrations we have found that the most probable capture time, velocity, semimajor axis, NEO group, and capture mechanism vary annually for this event. Most particles show that there is an increased capture probability during Earth’s aphelion and perihelion. In the future, events like these may be detected ahead of time using telescopes like the Large Synoptic Survey Telescope, and the pre-atmospheric trajectory can be verified. 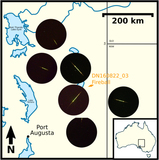