Near-resonance in a System of Sub-Neptunes from TESS

We report the Transiting Exoplanet Survey Satellite detection of a multi-planet system orbiting the V = 10.9 K0 dwarf TOI-125. We find evidence for up to five planets, with varying confidence. Three transit signals with high signal-to-noise ratio correspond to sub-Neptune-sized planets (2.76, 2.79, and 2.94 R ⊕), and we statistically validate the planetary nature of the two inner planets (P b = 4.65 days, P c = 9.15 days). With only two transits observed, we report the outer object (P .03 = 19.98 days) as a planet candidate with high signal-to-noise ratio. We also detect a candidate transiting super-Earth (1.4 R ⊕) with an orbital period of only 12.7 hr and a candidate Neptune-sized planet (4.2 R ⊕) with a period of 13.28 days, both at low signal-to-noise ratio. This system is amenable to mass determination via radial velocities and transit-timing variations, and provides an opportunity to study planets of similar size while controlling for age and environment. The ratio of orbital periods between TOI-125 b and c (P c /P b = 1.97) is slightly lower than an exact 2:1 commensurability and is atypical of multiple planet systems from Kepler, which show a preference for period ratios just wide of first-order period ratios. A dynamical analysis refines the allowed parameter space through stability arguments and suggests that despite the nearly commensurate periods, the system is unlikely to be in resonance. 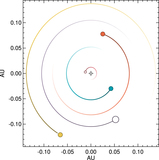