We report results of speckle-interferometric monitoring of visual hierarchical systems using the newly commissioned instrument NN-EXPLORE Exoplanet and Stellar Speckle Imager at the 3.5 m WIYN telescope. During one year, 390 measurements of 129 resolved subsystems were made, while some targets were unresolved. Using our astrometry and archival data, we computed 36 orbits (27 for the first time). Spectro-interferometric orbits of seven pairs are determined by combining positional measurements with radial velocities measured, mostly, with the Center for Astrophysics digital speedometers. For the hierarchical systems HIP 65026 (periods 49 and 1.23 yr) and HIP 85209 (periods 34 and 1.23 yr) we determined both the inner and the outer orbits using astrometry and radial velocities and measured the mutual orbit inclinations of 11.°3 ± 1.°0 and 12.°0 ± 3.°0, respectively. Four bright stars are resolved for the first time; two of those are triple systems. Several visual subsystems announced in the literature are shown to be spurious. We note that subsystems in compact hierarchies with outer separations less than 100 au tend to have less eccentric orbits compared to wider hierarchies. 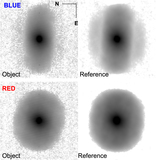