We measure near-ultraviolet (NUV) aperture magnitudes from Galaxy Evolution Explorer images for 258 ultra-diffuse galaxy (UDG) candidates drawn from the initial Systematically Measuring Ultra-Diffuse Galaxies (SMUDGes) survey of ∼300 square degrees surrounding, and including, the Coma galaxy cluster. For the vast majority, 242 of them, we present flux upper limits due either to a lack of significant flux in the aperture or confusion with other objects projected within the aperture. These limits often place interesting constraints on the UDG candidates, indicating that they are non-star-forming or quiescent. In particular, we identify field, quiescent UDG candidates, which are a challenge for formation models and are, therefore, compelling prospects for spectroscopic follow-up and distance determinations. We present far-ultraviolet (FUV) and NUV magnitudes for 16 detected UDG candidates and compare those galaxies to the local population of galaxies on color-magnitude and specific star formation rate diagrams. The NUV-detected UDG candidates form mostly an extension toward lower stellar masses of the star-forming galaxy sequence, and none of these lie within regions of high local galaxy density. UDG candidates span a range of properties, although almost all are consistent with being quiescent, low surface brightness galaxies, regardless of environment. 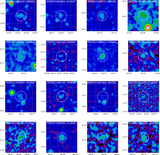