Multiplicity is a fundamental property that is set early during stellar lifetimes, and it is a stringent probe of the physics of star formation. The distribution of close companions around young stars is still poorly constrained by observations. We present an analysis of stellar multiplicity derived from Apache Point Observatory Galactic Evolution Experiment-2 spectra obtained in targeted observations of nearby star-forming regions. This is the largest homogeneously observed sample of high-resolution spectra of young stars. We developed an autonomous method to identify double-lined spectroscopic binaries (SB2s). Out of 5007 sources spanning the mass range of ∼0.05-1.5 M ⊙, we find 399 binaries, including both radial velocity (RV) variables and SB2s. The mass ratio distribution of SB2s is consistent with being uniform for q < 0.95 with an excess of twins for q > 0.95. The period distribution is consistent with what has been observed in close binaries (<10 au) in the evolved populations. Three systems are found to have q ∼ 0.1, with a companion located within the brown dwarf desert. There are no strong trends in the multiplicity fraction as a function of cluster age from 1 to 100 Myr. There is a weak dependence on stellar density, with companions being most numerous at Σ* ∼ 30 stars/pc-2 and decreasing in more diffuse regions. Finally, disk-bearing sources are deficient in SB2s (but not RV variables) by a factor of ∼2 this deficit is recovered by the systems without disks. This may indicate a quick dispersal of disk material in short-period equal-mass systems that is less effective in binaries with lower q. 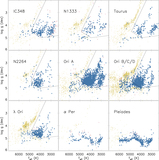