Three Direct Imaging Epochs Could Constrain the Orbit of Earth 2.0 inside the Habitable Zone

Space-based direct imaging missions (HabEx, LUVOIR) would observe reflected light from exoplanets in the habitable zones of Sun-like stars. The ultimate—but not sole—goal of these concept missions is to characterize such planets. Knowing an exoplanet’s orbit would help twofold: (i) its semimajor axis informs whether the planet might harbor surface liquid water, making it a priority target; and (ii) predicting the planet’s future location would tell us where and when to look. The science yields of HabEx and LUVOIR depend on the number, cadence, and precision of observations required to establish a planet’s orbit. We produce mock observations using realistic distributions for the six Keplerian orbital parameters, experimenting with both beta and uniform eccentricity distributions, and accounting for imperfect astrometry (σ = 3.5 mas) and obscuration due to the inner working angle of a high-contrast imaging system (inner working angle = 31 mas). Using Markov chain Monte Carlo methods, we fit the orbital parameters, and retrieve their average precisions and accuracies as functions of cadence, number of epochs, and distance to the target. Given the time at which it was acquired, each image provides two data: the x and y position of the planet with respect to its star. Parameter retrieval based on one or two images is formally underconstrained, yet the semimajor axis posterior can be obtained semi-analytically. For a planet at 1 au around a star at a distance of 10 pc, three epochs constrain the semimajor axis to within ≲5%, if each image is taken at least 90 days apart. 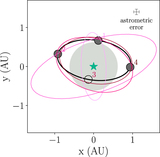