We present results of our large-scale, optical, multi-epoch photometric survey across ∼180 square degrees in the Orion OB1 association, complemented with extensive follow-up spectroscopy. Our focus is mapping and characterizing the off-cloud, low-mass, pre-main-sequence (PMS) populations. We report 2062 K- and M-type confirmed T Tauri members; 59% are located in the OB1a subassociation, 27% in the OB1b subassociation, and the remaining 14% in the A and B molecular clouds. We characterize two new clusterings of T Tauri stars, the HD 35762 and HR 1833 groups, both located in OB1a not far from the 25 Ori cluster. We also identify two stellar overdensities in OB1b, containing 231 PMS stars, and find that the OB1b region is composed of two populations at different distances, possibly due to the OB1a subassociation overlapping with the front of OB1b. A ∼2 deg wide halo of young stars surrounds the Orion Nebula Cluster, corresponding in part to the low-mass populations of NGC 1977 and NGC 1980. We use the strength of Hα in emission, combined with the IR excess and optical variability, to define a new type of T Tauri star, the C/W class, stars we propose may be nearing the end of their accretion phase, in an evolutionary state between classical and weak-lined T Tauri stars. The evolution of the ensemble-wide equivalent width of Li I λ6707 indicates a Li depletion timescale of ∼8.5 Myr. Disk accretion declines with an e-folding timescale of ∼2 Myr, consistent with previous studies. 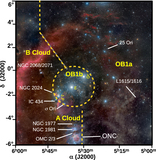