Radial Velocities in the Outermost Disk toward the Anticenter

We measure the mean Galactocentric radial component of the velocity of stars (v R ) in the disk at 8 kpc < R < 28 kpc in the direction of the anticenter. For this, we use the Apache Point Galactic Evolution Experiment. Furthermore, we compare the result with H I maps along the same line of sight. We find an increase in positive (expansion) v R at R ≈ 9-13 kpc, reaching a maximum of ≈6 km s-1, and a decrease at large values of R, reaching a negative (contraction) value of ≈-10 km s-1 for R > 17 kpc. Negative velocities are also observed in 21 cm H I maps, possibly dominated by local gas emission. Among the possible dynamical causes for these non-zero v R , factors such as the effect of the Galactic bar, streams, or mergers do not seem appropriate to explain our observations. An explanation might be the gravitational attraction of overdensities in a spiral arm. As a matter of fact, we see a change of regime from positive to negative velocities around R ≈ 15 kpc, in the position where we cross the Outer spiral arm in the anticenter. The mass in spiral arms necessary to produce these velocities would be about 3% of the mass of the disk, consistent with our knowledge of the spiral arms. Another scenario that we explore is a simple class of out-of-equilibrium systems in which radial motions are generally created by the monolithic collapse of isolated self-gravitating overdensities. 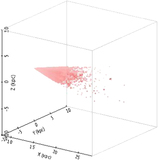