Context. Deuterated interstellar molecules frequently have abundances relative to their main isotopologues much higher than the overall elemental D-to-H ratio in the cold dense interstellar medium. H3+ and its isotopologues play a key role in the deuterium fractionation; however, the abundances of these isotopologues have not been measured empirically with respect to H3+ to date.
Aims: Our aim was to constrain the relative abundances of H2D+ and D3+ in the cold outer envelope of the hot core CRL 2136 IRS 1.
Methods: We carried out three observations targeting H3+ and its isotopologues using the spectrographs CRIRES at the VLT, iSHELL at IRTF, and EXES on board SOFIA. In addition, the CO overtone band at 2.3 μm was observed by iSHELL to characterize the gas on the line of sight.
Results: The H3+ ion was detected toward CRL 2136 IRS 1 as in previous observations. Spectroscopy of lines of H2D+ and D3+ resulted in non-detections. The 3σ upper limits of N(H2D+)/N(H3+) and N(D3+)/N(H3+) are 0.24 and 0.13, respectively. The population diagram for CO is reproduced by two components of warm gas with the temperatures 58 and 530 K, assuming a local thermodynamic equilibrium (LTE) distribution of the rotational levels. Cold gas (<20 K) makes only a minor contribution to the CO molecular column toward CRL 2136 IRS 1.
Conclusions: The critical conditions for deuterium fractionation in a dense cloud are low temperature and CO depletion. Given the revised cloud properties, it is no surprise that H3+ isotopologues are not detected toward CRL 2136 IRS 1. The result is consistent with our current understanding of how deuterium fractionation proceeds.

Based on data collected in CRIRES DDT program [289.C-5042] at the VLT on Cerro Paranal (Chile), which is operated by the European Southern Observatory (ESO). Based on data collected by iSHELL at the Infrared Telescope Facility, which is operated by the University of Hawaii under contract NNH14CK55B with the National Aeronautics and Space Administration. Based on observations made with the NASA/DLR Stratospheric Observatory for Infrared Astronomy (SOFIA). SOFIA is jointly operated by the Universities Space Research Association, Inc. (USRA), under NASA contract NNA17BF53C, and the Deutsches SOFIA Institut (DSI) under DLR contract 50 OK 0901 to the University of Stuttgart. 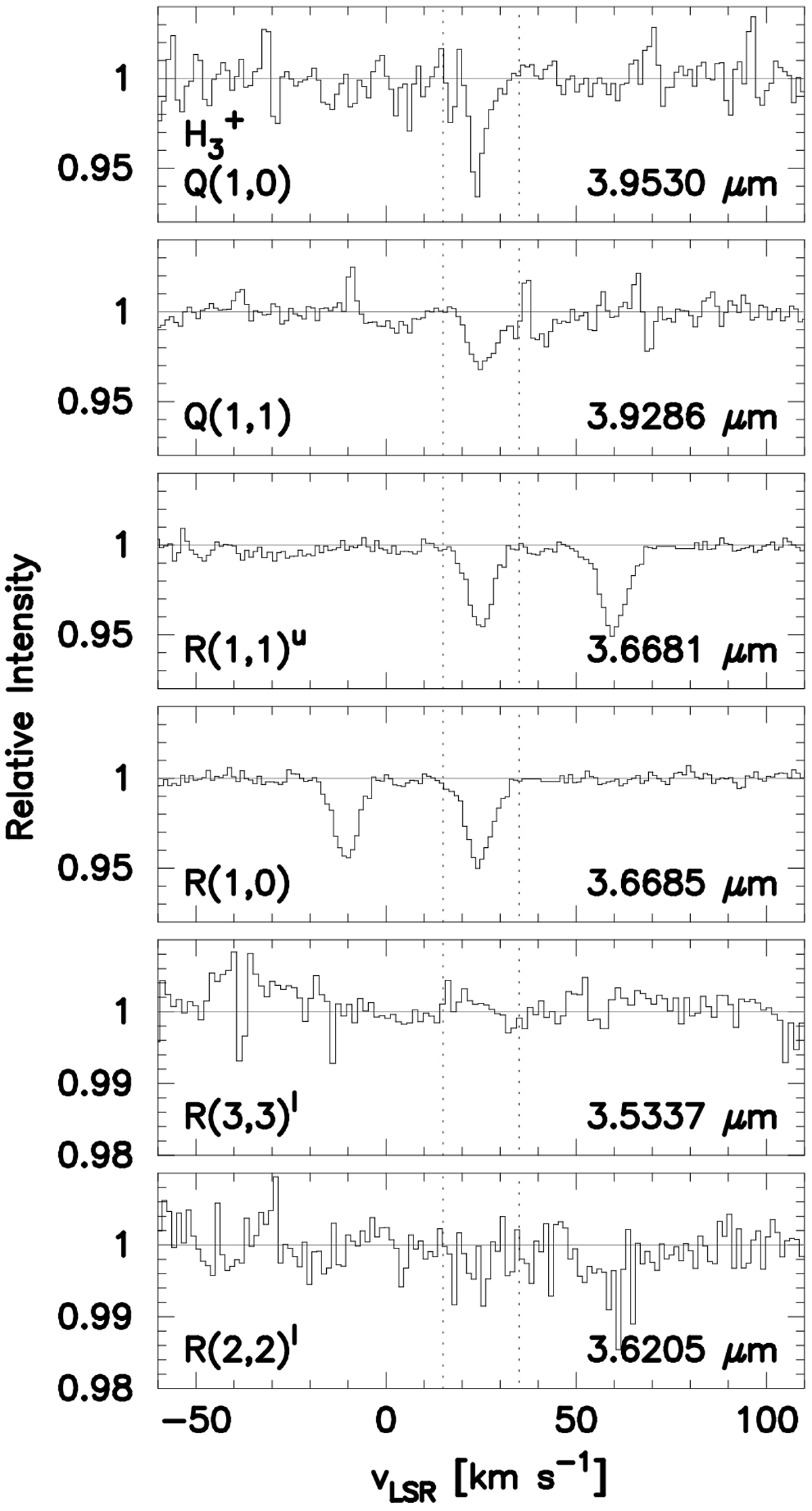