We report the discovery of a galaxy overdensity around a Compton-thick Fanaroff-Riley type II (FRII) radio galaxy at z = 1.7 in the deep multiband survey around the z = 6.3 quasi-stellar object (QSO) SDSS J1030+0524. Based on a 6 h VLT/MUSE and on a 4 h LBT/LUCI observation, we identify at least eight galaxy members in this structure with spectroscopic redshift z = 1.687 - 1.699, including the FRII galaxy at z = 1.699. Most members are distributed within 400 kpc from the FRII core. Nonetheless, the whole structure is likely much more extended, as one of the members was serendipitously found at ∼800 kpc projected separation. The classic radio structure of the FRII itself extends for ∼600 kpc across the sky. Most of the identified overdensity members are blue, compact galaxies that are actively forming stars at rates of ∼8-60 M⊙ yr-1. For the brightest of them, a half-light radius of 2.2 ± 0.8 kpc at 8000 Å rest-frame was determined based on adaptive optics-assisted observations with LBT/SOUL in the Ks band. We do not observe any strong galaxy morphological segregation or concentration around the FRII core. This suggests that the structure is far from being virialized and likely constitutes the progenitor of a local massive galaxy group or cluster caught in its main assembly phase. Based on a 500 ks Chandra ACIS-I observation, we found that the FRII nucleus hosts a luminous QSO (L2 - 10 keV = 1.3 × 1044 erg s-1, intrinsic and rest-frame) that is obscured by Compton-thick absorption (NH = 1.5 ± 0.6 × 1024 cm-2). Under standard bolometric corrections, the total measured radiative power (Lrad ∼ 4 × 1045 erg s-1) is similar to the jet kinetic power that we estimated from radio observations at 150 MHz (Pkin = 6.3 × 1045 erg s-1), in agreement with what is observed in powerful jetted AGN. Our Chandra observation is the deepest so far for a distant FRII within a galaxy overdensity. It revealed significant diffuse X-ray emission within the region that is covered by the overdensity. In particular, X-ray emission extending for ∼240 kpc is found around the eastern lobe of the FRII. Four out of the six MUSE star-forming galaxies in the overdensity are distributed in an arc-like shape at the edge of this diffuse X-ray emission. These objects are concentrated within 200 kpc in the plane of the sky and within 450 kpc in radial separation. Three of them are even more concentrated and fall within 60 kpc in both transverse and radial distance. The probability of observing four out of the six z = 1.7 sources by chance at the edge of the diffuse emission is negligible. In addition, these four galaxies have the highest specific star formation rates of the MUSE galaxies in the overdensity and lie above the main sequence of field galaxies of equal stellar mass at z = 1.7. We propose that the diffuse X-rays originate from an expanding bubble of gas that is shock heated by the FRII jet, and that star formation is promoted by the compression of the cold interstellar medium of the galaxies around the bubble, which may be remarkable evidence of positive AGN feedback on cosmological scales. We emphasize that our conclusions about the feedback are robust because even assuming that the diffuse X-ray emission arises from inverse Compton scattering of photons of the cosmic microwave background by the relativistic electrons in the radio lobe, star formation may be promoted by the nonthermal pressure of the expanding lobe. 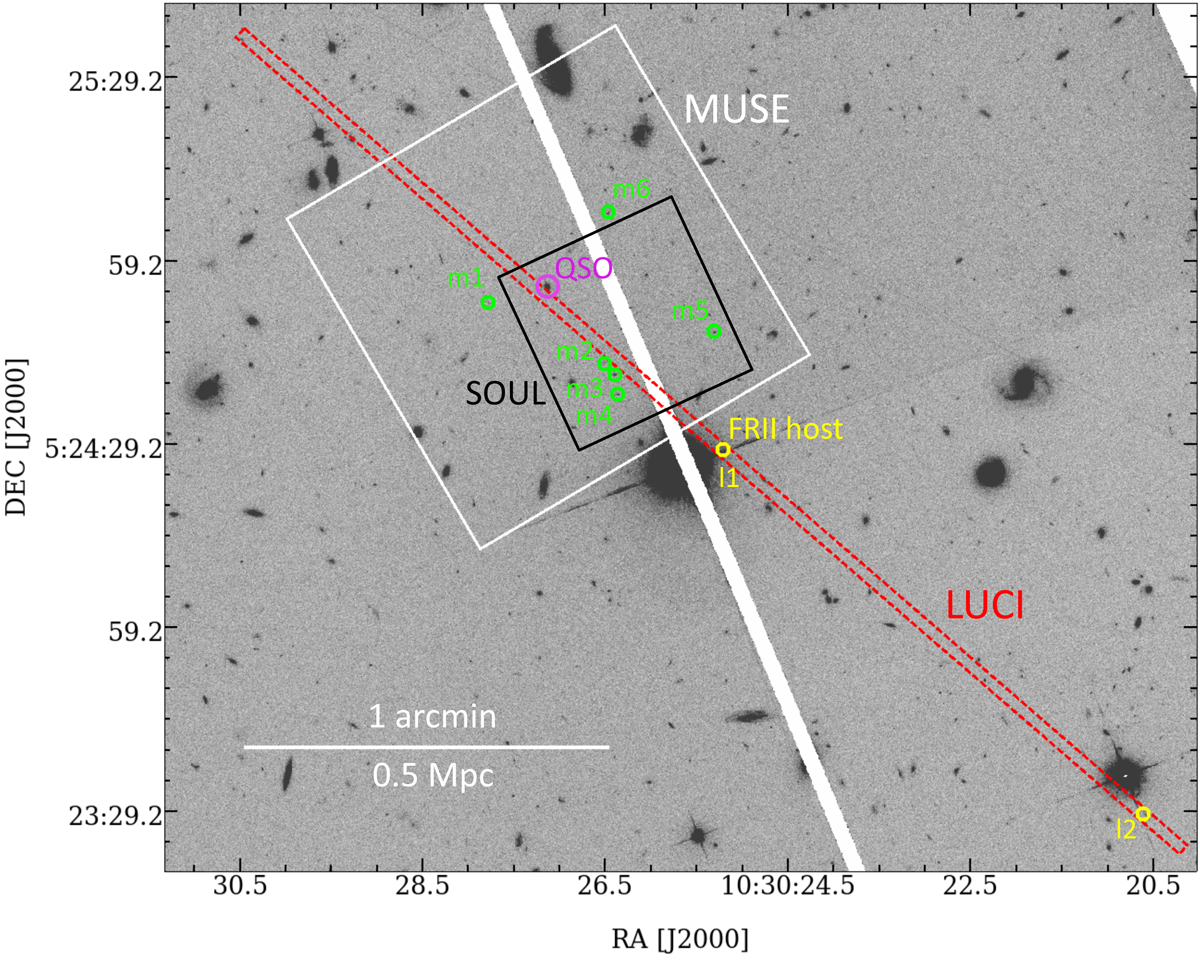