Context. Observations of the Galactic bulge suggest that the disk formed through secular evolution rather than gas dissipation and/or mergers, as previously believed. This would imply very similar chemistry in the disk and bulge. Some elements, such as the α-elements, are well studied in the bulge, but others like the neutron-capture elements are much less well explored. Stellar mass and metallicity are factors that affect the neutron-capture process. Due to this, the enrichment of the ISM and the abundance of neutron-capture elements vary with time, making them suitable probes for Galactic chemical evolution.
Aims: In this work, we make a differential comparison of neutron-capture element abundances determined in the local disk(s) and the bulge, focusing on minimising possible systematic effects in the analysis, with the aim of finding possible differences/similarities between the populations.
Methods: Abundances are determined for Zr, La, Ce, and Eu in 45 bulge giants and 291 local disk giants, from high-resolution optical spectra. The abundances are determined by fitting synthetic spectra using the SME-code. The disk sample is separated into thin- and thick-disk components using a combination of abundances and kinematics.
Results: We find flat Zr, La, and Ce trends in the bulge, with a 0.1 dex higher La abundance compared with the disk, possibly indicating a higher s-process contribution for La in the bulge. [Eu/Fe] decreases with increasing [Fe/H], with a plateau at around [Fe/H] -0.4, pointing at similar enrichment to α-elements in all populations.
Conclusions: We find that the r-process dominated the neutron-capture production at early times both in the disks and bulge. Further, [La/Eu] ratios for the bulge are systematically higher than for the thick disk, pointing to either a) a different amount of SN II or b) a different contribution of the s-process in the two populations. Considering [(La+Ce)/Zr], the bulge and the thick disk follow each other closely, suggesting a similar ratio of high-to-low-mass asymptotic giant branch stars.

Full Tables A.1-A.4 are only available at the CDS via anonymous ftp to http://cdsarc.u-strasbg.fr (ftp://130.79.128.5) or via http://cdsarc.u-strasbg.fr/viz-bin/cat/J/A+A/631/A113 Based on observations made with the Nordic Optical Telescope (programs 51-018 and 53-002) operated by the Nordic Optical Telescope Scientific Association at the Observatorio del Roque de los Muchachos, La Palma, Spain, of the Instituto de Astrofisica de Canarias, spectral data retrieved from PolarBase at Observatoire Midi Pyrénées, and observations collected at the European Southern Observatory, Chile (ESO programs 71.B-0617(A), 073.B-0074(A), and 085.B-0552(A)). 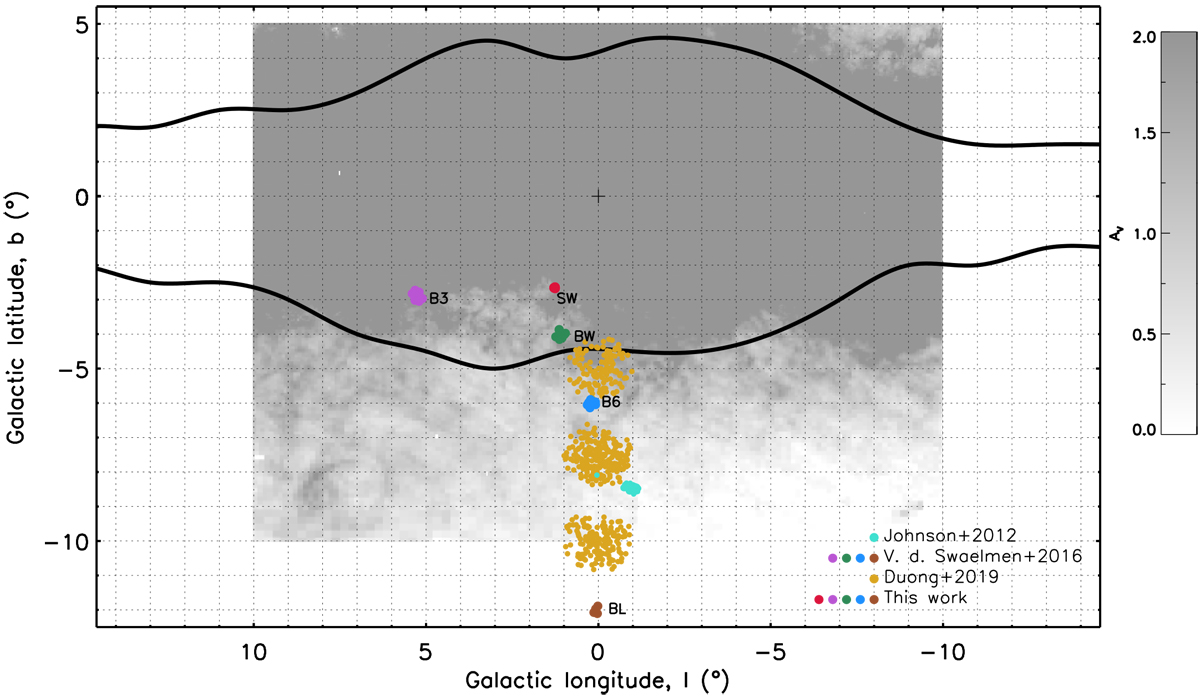