Understanding the atmospheric properties and chemical composition of the ultra-hot Jupiter HAT-P-7b. I. Cloud and chemistry mapping

Context. Of the presently known ≈3900 exoplanets, sparse spectral observations are available for ≈100. Ultra-hot Jupiters have recently attracted interest from observers and theoreticians alike, as they provide observationally accessible test cases. Confronting detailed theoretical models with observations is of preeminent importance in preparation for upcoming space-based telescopes.
Aims: We aim to study cloud formation on the ultra-hot Jupiter HAT-P-7b, the resulting composition of the local gas phase, and how their global changes affect wavelength-dependent observations utilised to derive fundamental properties of the planet.
Methods: We apply a hierarchical modelling approach as a virtual laboratory to study cloud formation and gas-phase chemistry. We utilise 97 vertical 1D profiles of a 3D GCM for HAT-P-7b to evaluate our kinetic cloud formation model consistently with the local equilibrium gas-phase composition. We use maps and slice views to provide a global understanding of the cloud and gas chemistry.
Results: The day/night temperature difference on HAT-P-7b (ΔT ≈ 2500 K) causes clouds to form on the nightside (dominated by H2/He) while the dayside (dominated by H/He) retains cloud-free equatorial regions. The cloud particles vary in composition and size throughout the vertical extension of the cloud, but also globally. TiO2[s]/Al2O3[s]/CaTiO3[s]-particles of cm-sized radii occur in the higher dayside-latitudes, resulting in a dayside dominated by gas-phase opacity. The opacity on the nightside, however, is dominated by 0.01…0.1μm particles made of a material mix dominated by silicates. The gas pressure at which the atmosphere becomes optically thick is 10-4 bar in cloudy regions, and 0.1 bar in cloud-free regions.
Conclusions: HAT-P-7b features strong morning/evening terminator asymmetries, providing an example of patchy clouds and azimuthally-inhomogeneous chemistry. Variable terminator properties may be accessible by ingress/egress transmission photometry (e.g., CHEOPS and PLATO) or spectroscopy. The large temperature differences of ≈2500 K result in an increasing geometrical extension from the night- to the dayside. The H2O abundance at the terminator changes by <1 dex with altitude and ≲0.3 dex (a factor of 2) across the terminator for a given pressure, indicating that H2O abundances derived from transmission spectra can be representative of the well-mixed metallicity at P ≳ 10 bar. We suggest the atmospheric C/O as an important tool to trace the presence and location of clouds in exoplanet atmospheres. The atmospheric C/O can be sub- and supersolar due to cloud formation. Phase curve variability of HAT-P-7b is unlikely to be caused by dayside clouds. 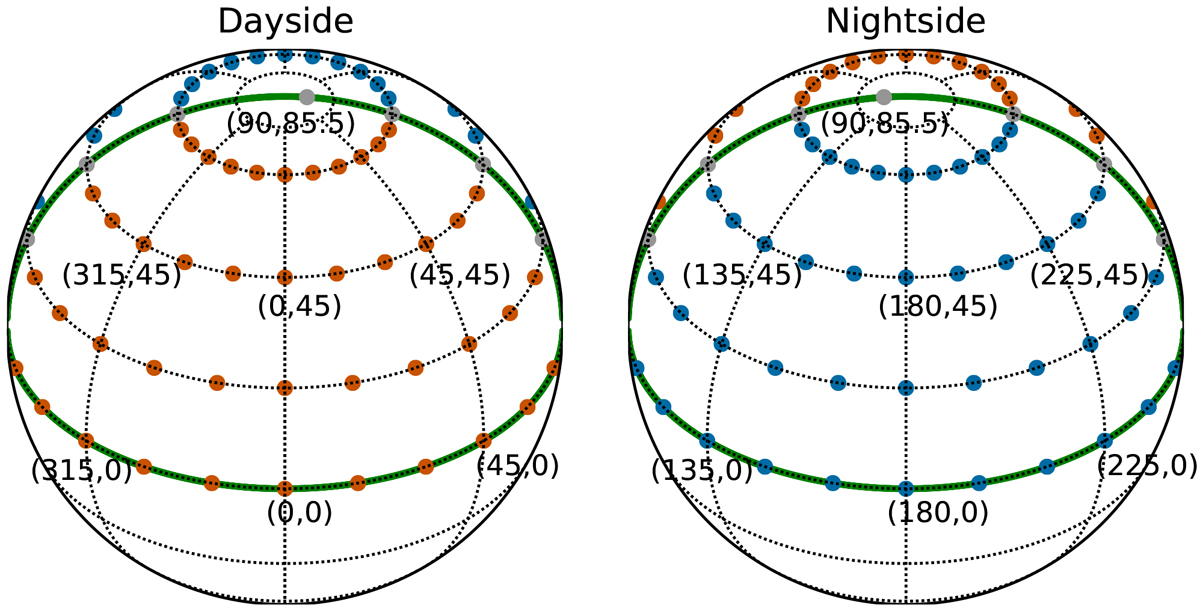