Context. The mechanism for jet formation in the disks of T Tauri stars remains poorly understood. Observational benchmarks to launching models can be provided by tracing the physical properties of the kinematic components of the wind and jet in the inner 100 au of the disk surface.
Aims: In the framework of the GIARPS High-resolution Observations of T Tauri stars (GHOsT) project, we aim to perform a multi-line analysis of the velocity components of the gas in the jet acceleration zone.
Methods: We analyzed the GIARPS-TNG spectra of six objects in the Taurus-Auriga complex (RY Tau, DG Tau, DL Tau, HN Tau, DO Tau, RW Aur A). Thanks to the combined high-spectral resolution (ℜ = 5°0 000-115 000) and wide spectral coverage ( 400-2400 nm) we observed several O 0, S +, N 0, N +, and Fe + forbidden lines spanning a large range of excitation and ionization conditions. In four objects (DG Tau, HN Tau, DO Tau, RW Aur A), temperature (Te), electron and total density (ne, nH), and fractional ionization (xe) were derived as a function of velocity through an excitation and ionization model. The abundance of gaseous iron, X(Fe), a probe of the dust content in the jet, was derived in selected velocity channels.
Results: The physical parameters vary smoothly with velocity, suggesting a common origin for the different kinematic components. In DG Tau and HN Tau, Te, xe, and X(Fe) increase with velocity (roughly from 6000 K, 0.05, 10%X(Fe)⊙ to 15 000 K, 0.6, 90%X(Fe)⊙). This trend is in agreement with disk-wind models in which the jet is launched from regions of the disk at different radii. In DO Tau and RW Aur A, we infer xe < 0.1, nH 106-7 cm-3, and X(Fe) ≲ X(Fe)⊙ at all velocities. These findings are tentatively explained by the formation of these jets from dense regions inside the inner, gaseous disk, or as a consequence of their high degree of collimation. 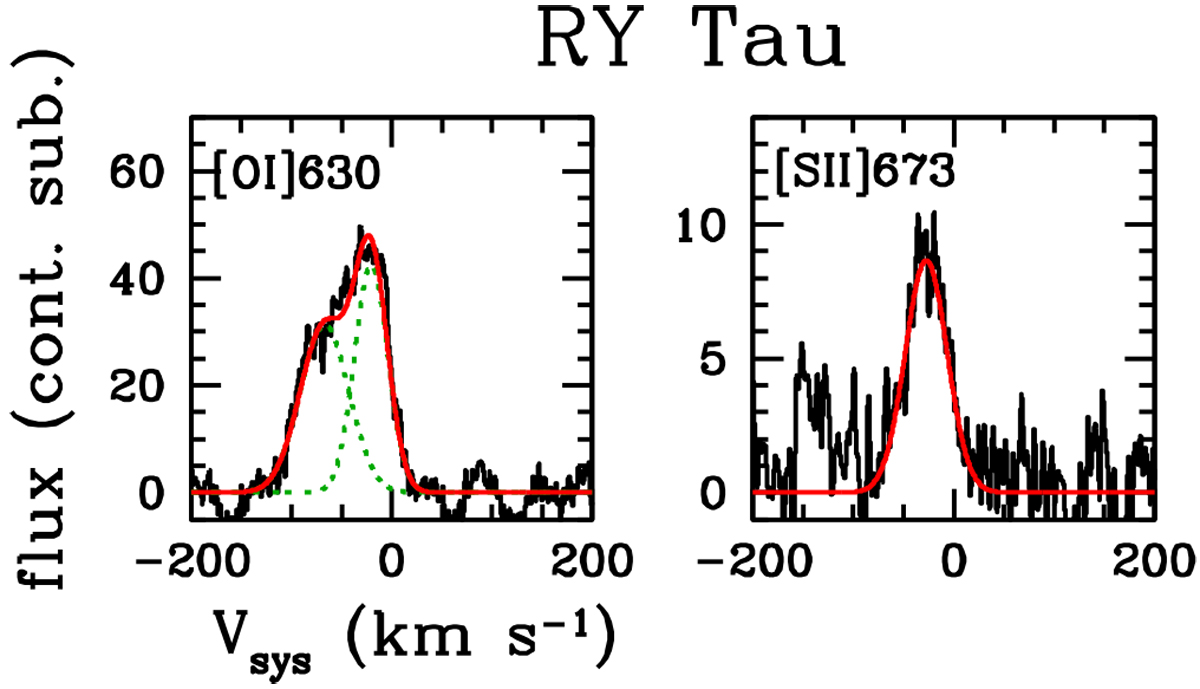