Context. Ionization through electron impact is a fundamental process associated with the evolution of the ionic structure and emissivity of astrophysical plasmas. Over several decades substantial efforts have been made to measure and calculate the ionization cross sections of ionization through electron impact of different ions shell by shell, in particular, of carbon ions. Spectral emission codes use electron-impact ionization cross sections and/or rates taken from different experimental and theoretical sources. The theoretical cross sections are determined numerically and include a diversity of quantum mechanical methods. The electron-impact ionization database therefore is not uniform in the methods, which makes it hard to determine the reason for the deviations with regard to experimental data. In many cases only total ionization rates for Maxwell-Boltzmann plasmas are available, which makes calculating inner-shell ionization in collisional-radiative models using thermal and nonthermal electron distribution functions difficult. A solution of this problem is the capability of generating the cross sections with an analytical method using the minimum number of atomic parameters. In this way, uniformity in the database is guaranteed, and thus deviations from experiments are easily identified and traced to the root of the method.
Aims: The modified relativistic binary encounter Bethe (MRBEB) method is such a simple analytical scheme based on one atomic parameter that allows determining electron-impact ionization cross sections. This work aims the determination of K- and L-shell cross sections of the carbon atom and ions using the MRBEB method and show their quality by: (i) comparing them with those obtained with the general ionization processes in the presence of electrons and radiation (GIPPER) code and the flexible atomic code (FAC), and (ii) determining their effects on the ionic structure and cooling of an optically thin plasma.
Methods: The MRBEB method was used to calculate the inner-shells cross sections, while the plasma calculations were carried out with the collisional+photo ionization plasma emission software (CPIPES). The mathematical methods used in this work comprise a modified version of the double-exponential over a semi-finite interval method for numerical integrations, Gauss-elimination method with scaled partial pivoting for the solution of systems of linear equations, and an iterative least-squares method to determine the fits of ionization cross sections.
Results: The three sets of cross sections show deviations among each other in different energy regions. The largest deviations occur near and in the peak maximum. Ion fractions and plasma emissivities of an optically thin plasma that evolves under collisional ionization equilibrium, derived using each set of cross sections, show deviations that decrease with increase in temperature and ionization degree. In spite of these differences, the calculations using the three sets of cross sections agree overall.
Conclusions: A simple model like the MRBEB is capable of providing cross sections similar to those calculated with more sophisticated quantum mechanical methods in the GIPPER and FAC codes. 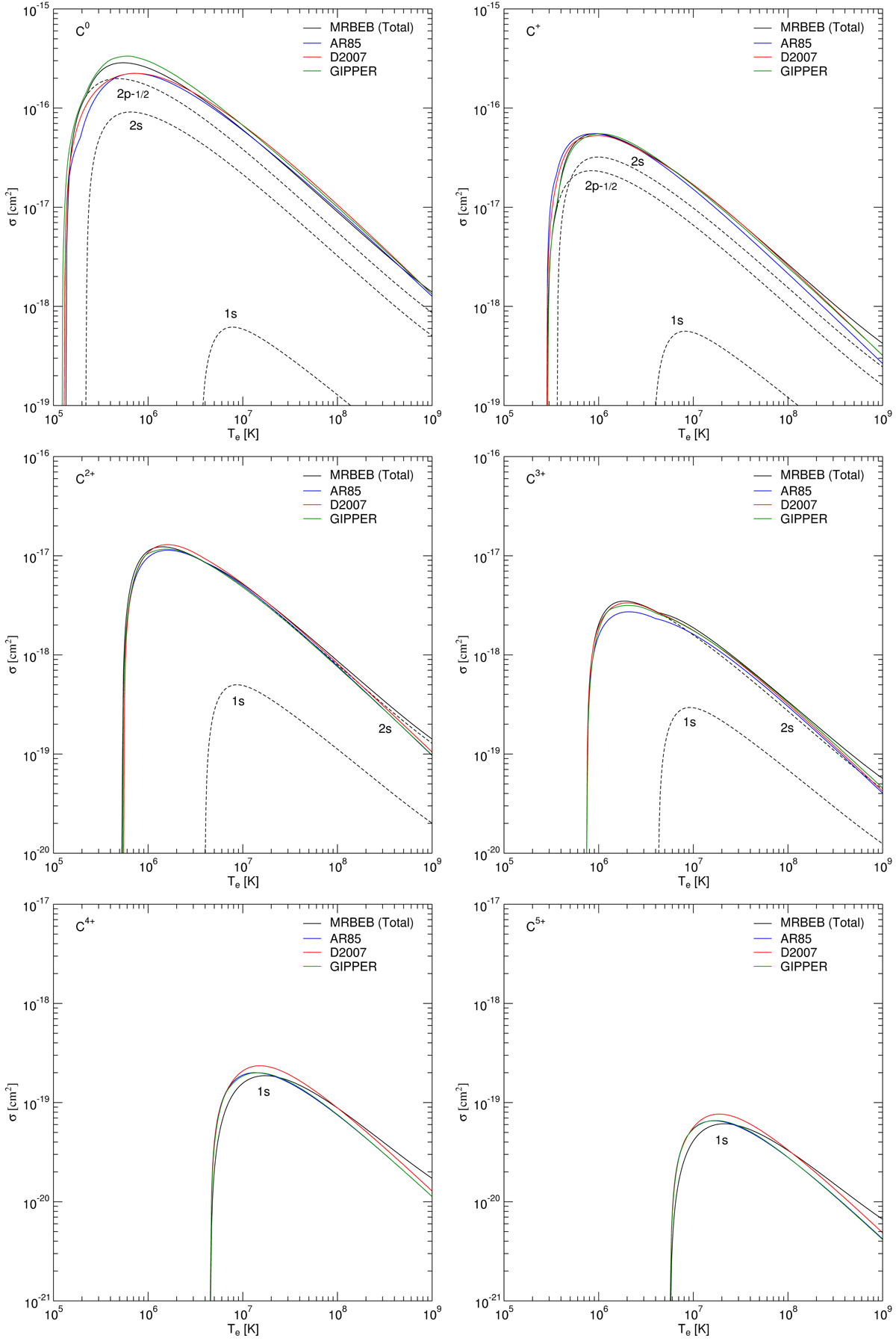