Fragmentation, rotation, and outflows in the high-mass star-forming region IRAS 23033+5951. A case study of the IRAM NOEMA large program CORE

Context. The formation process of high-mass stars (>8 M⊙) is poorly constrained, particularly the effects of clump fragmentation creating multiple systems and the mechanism of mass accretion onto the cores.
Aims: We study the fragmentation of dense gas clumps, and trace the circumstellar rotation and outflows by analyzing observations of the high-mass ( 500 M⊙) star-forming region IRAS 23033+5951.
Methods: Using the Northern Extended Millimeter Array (NOEMA) in three configurations and the IRAM 30 m single-dish telescope at 220 GHz, we probe the gas and dust emission at an angular resolution of 0.45'', corresponding to 1900 au.
Results: In the millimeter (mm) continuum emission, we identify a protostellar cluster with at least four mm-sources, where three of them show a significantly higher peak intensity well above a signal-to-noise ratio of 100. Hierarchical fragmentation from large to small spatial scales is discussed. Two fragments are embedded in rotating structures and drive molecular outflows, traced by 13CO (2-1) emission. The velocity profiles across two of the cores are similar to Keplerian but are missing the highest-velocity components close to the center of rotation, which is a common phenomena from observations like these, and other rotation scenarios are not excluded entirely. Position-velocity diagrams suggest protostellar masses of 6 and 19 M⊙. Rotational temperatures from fitting CH3CN (12K- 11K) spectra are used for estimating the gas temperature and thereby also the disk stability against gravitational fragmentation, utilizing Toomre's Q parameter. Assuming that the candidate disk is in Keplerian rotation about the central stellar object and considering different disk inclination angles, we identify only one candidate disk as being unstable against gravitational instability caused by axisymmetric perturbations.
Conclusions: The dominant sources cover different evolutionary stages within the same maternal gas clump. The appearance of rotation and outflows of the cores are similar to those found in low-mass star-forming regions.

The reduced datacubes and maps are only available at the CDS via anonymous ftp to http://cdsarc.u-strasbg.fr (ftp://130.79.128.5) or via http://cdsarc.u-strasbg.fr/viz-bin/qcat?J/A+A/629/A10 or alternatively at http://www.mpia.de/core.Based on observations carried out with the IRAM NOrthern Extended Millimeter Array (NOEMA). IRAM is supported by INSU/ CNRS (France), MPG (Germany), and IGN (Spain). 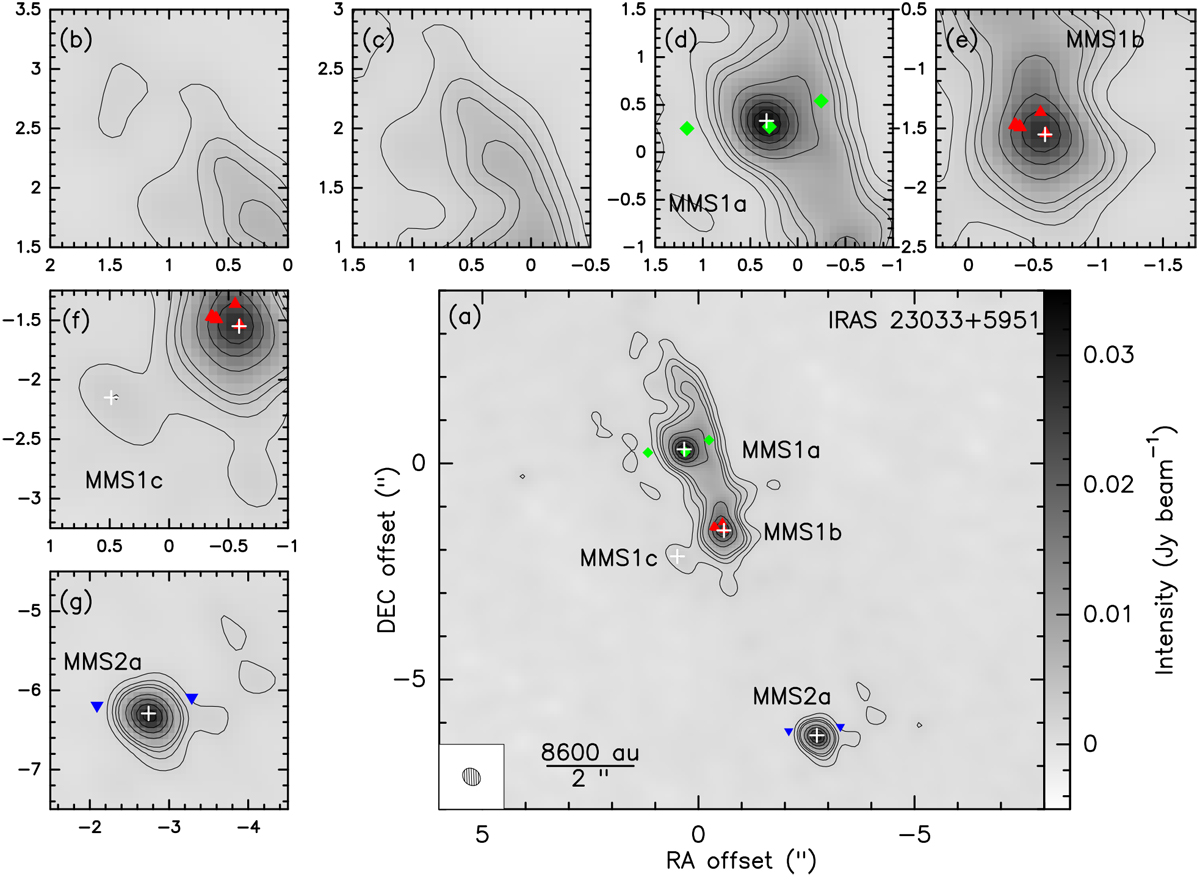