The Wolf-Rayet binaries of the nitrogen sequence in the Large Magellanic Cloud. Spectroscopy, orbital analysis, formation, and evolution

Context. Massive Wolf-Rayet (WR) stars dominate the radiative and mechanical energy budget of galaxies and probe a critical phase in the evolution of massive stars prior to core collapse. It is not known whether core He-burning WR stars (classical WR; cWR) form predominantly through wind stripping (w-WR) or binary stripping (b-WR). Whereas spectroscopy of WR binaries has so-far largely been avoided because of its complexity, our study focuses on the 44 WR binaries and binary candidates of the Large Magellanic Cloud (LMC; metallicity Z ≈ 0.5 Z⊙), which were identified on the basis of radial velocity variations, composite spectra, or high X-ray luminosities.
Aims: Relying on a diverse spectroscopic database, we aim to derive the physical and orbital parameters of our targets, confronting evolution models of evolved massive stars at subsolar metallicity and constraining the impact of binary interaction in forming these stars.
Methods: Spectroscopy was performed using the Potsdam Wolf-Rayet (PoWR) code and cross-correlation techniques. Disentanglement was performed using the code Spectangular or the shift-and-add algorithm. Evolutionary status was interpreted using the Binary Population and Spectral Synthesis (BPASS) code, exploring binary interaction and chemically homogeneous evolution.
Results: Among our sample, 28/44 objects show composite spectra and are analyzed as such. An additional five targets show periodically moving WR primaries but no detected companions (SB1); two (BAT99 99 and 112) are potential WR + compact-object candidates owing to their high X-ray luminosities. We cannot confirm the binary nature of the remaining 11 candidates. About two-thirds of the WN components in binaries are identified as cWR, and one-third as hydrogen-burning WR stars. We establish metallicity-dependent mass-loss recipes, which broadly agree with those recently derived for single WN stars, and in which so-called WN3/O3 stars are clear outliers. We estimate that 45 ± 30% of the cWR stars in our sample have interacted with a companion via mass transfer. However, only ≈12 ± 7% of the cWR stars in our sample naively appear to have formed purely owing to stripping via a companion (12% b-WR). Assuming that apparently single WR stars truly formed as single stars, this comprises ≈4% of the whole LMC WN population, which is about ten times less than expected. No obvious differences in the properties of single and binary WN stars, whose luminosities extend down to log L ≈ 5.2 [L⊙], are apparent. With the exception of a few systems (BAT99 19, 49, and 103), the equatorial rotational velocities of the OB-type companions are moderate (veq ≲ 250 km s-1) and challenge standard formalisms of angular-momentum accretion. For most objects, chemically homogeneous evolution can be rejected for the secondary, but not for the WR progenitor.
Conclusions: No obvious dichotomy in the locations of apparently single and binary WN stars on the Hertzsprung-Russell diagram is apparent. According to commonly used stellar evolution models (BPASS, Geneva), most apparently single WN stars could not have formed as single stars, implying that they were stripped by an undetected companion. Otherwise, it must follow that pre-WR mass-loss/mixing (e.g., during the red supergiant phase) are strongly underestimated in standard stellar evolution models. 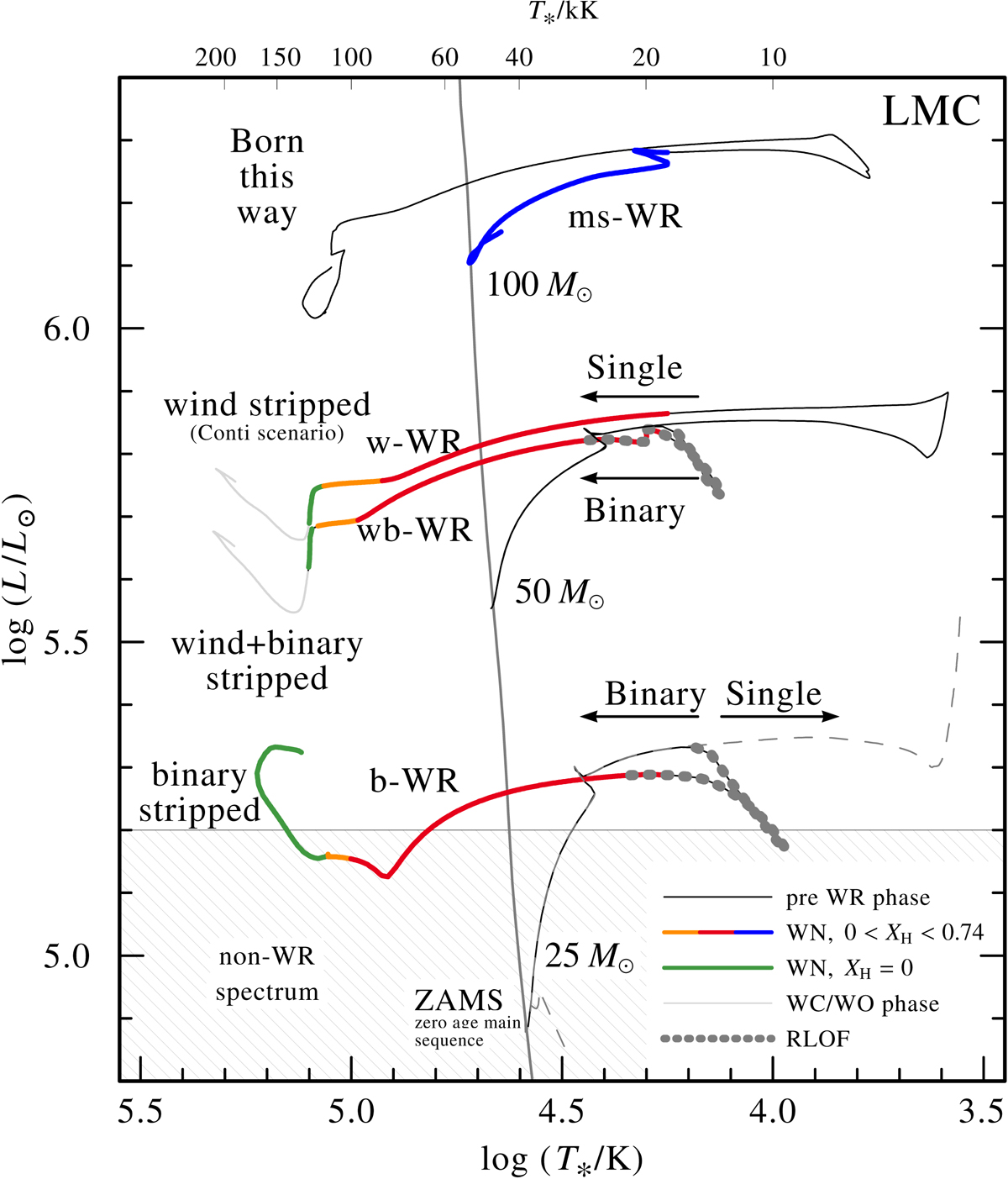