Stellar and substellar companions of nearby stars from Gaia DR2. Binarity from proper motion anomaly

Context. The census of stellar and substellar companions of nearby stars is largely incomplete, in particular toward the low-mass brown dwarf and long-period exoplanets. It is, however, fundamentally important in the understanding of the stellar and planetary formation and evolution mechanisms. Nearby stars are particularly favorable targets for high precision astrometry.
Aims: We aim to characterize the presence of physical companions of stellar and substellar mass in orbit around nearby stars.
Methods: Orbiting secondary bodies influence the proper motion of their parent star through their gravitational reflex motion. Using the HIPPARCOS and Gaia's second data release (GDR2) catalogs, we determined the long-term proper motion of the stars common to these two catalogs. We then searched for a proper motion anomaly (PMa) between the long-term proper motion vector and the GDR2 (or HIPPARCOS) measurements, indicative of the presence of a perturbing secondary object. We focussed our analysis on the 6741 nearby stars located within 50 pc, and we also present a catalog of the PMa for ≳99% of the HIPPARCOS catalog (≈117 000 stars).
Results: 30% of the stars studied present a PMa greater than 3σ. The PMa allows us to detect orbiting companions, or set stringent limits on their presence. We present a few illustrations of the PMa analysis to interesting targets. We set upper limits of 0.1-0.3 MJ to potential planets orbiting Proxima between 1 and 10 au (Porb = 3 to 100 years). We confirm that Proxima is gravitationally bound to α Cen. We recover the masses of the known companions of ɛ Eri, ɛ Ind, Ross 614 and β Pic. We also detect the signature of a possible planet of a few Jovian masses orbiting τ Ceti.
Conclusions: Based on only 22 months of data, the GDR2 has limitations. But its combination with the HIPPARCOS catalog results in very high accuracy PMa vectors, that already enable us to set valuable constraints on the binarity of nearby objects. The detection of tangential velocity anomalies at a median accuracy of σ(ΔvT) = 1.0 m s-1 per parsec of distance is already possible with the GDR2. This type of analysis opens the possibility to identify long period orbital companions otherwise inaccessible. For long orbital periods, Gaia's complementarity to radial velocity and transit techniques (that are more sensitive to short orbital periods) already appears to be remarkably powerful. 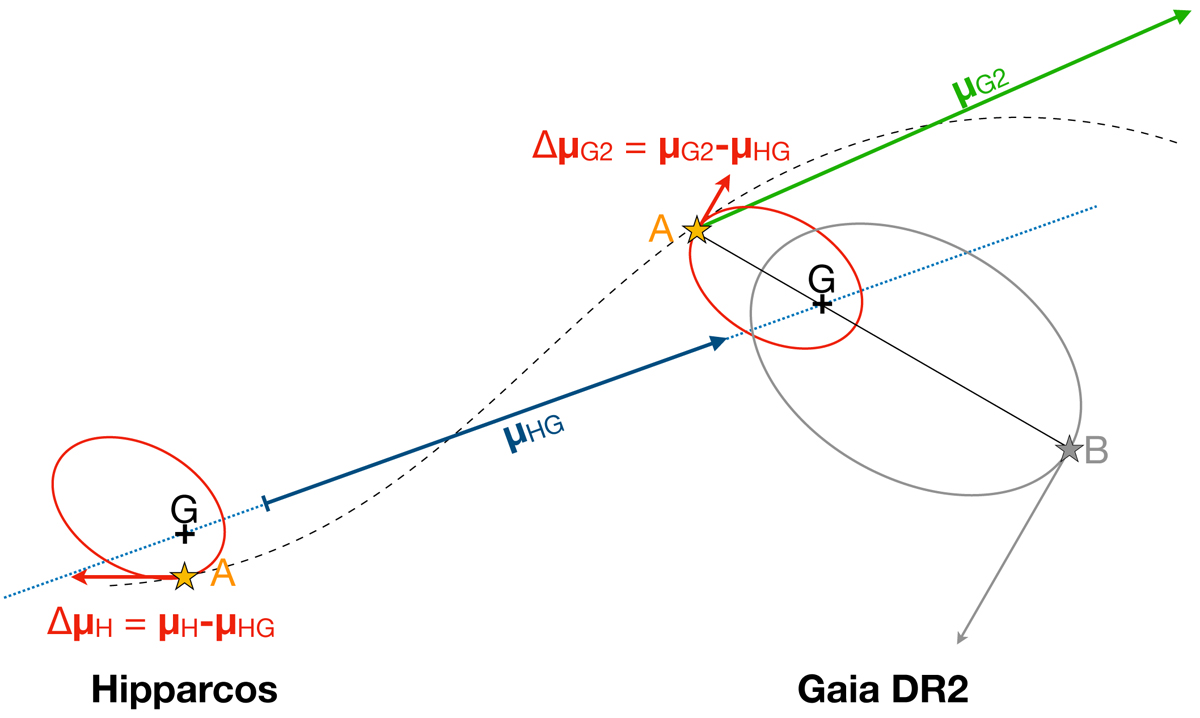