High-resolution confirmation of an extended helium atmosphere around WASP-107b

Context. Probing the evaporation of exoplanet atmospheres is key to understanding the formation and evolution of exoplanetary systems. The main tracer of evaporation in the UV is the Lyman-α transition, which can reveal extended exospheres of neutral hydrogen. Recently, the near-infrared (NIR) metastable helium triplet (10 833 Å) revealed extended thermospheres in several exoplanets. This opens a new window into evaporation.
Aims: We aim at spectrally resolving the first helium absorption signature detected in the warm Saturn WASP-107b with the Wide Filed Camera 3 on board the Hubble Space Telescope (HST/WFC3).
Methods: We obtained one transit of WASP-107b with CARMENES installed on the 3.5 m telescope at the Calar Alto observatory.
Results: We detect an excess helium absorption signature of 5.54 ± 0.27% (20σ) in the planet rest frame during the transit. The detection is in agreement with the previous detection achieved with HST/WFC3. The signature shows an excess absorption in the blue part of the lines, suggesting that He I atoms are escaping from the atmosphere of WASP-107b. We interpret the time-series absorption spectra using the 3D EVE code. Our observations can be explained by combining an extended thermosphere that fills half of the Roche lobe and a large exospheric tail sustained by an escape rate of metastable helium of about 106 g s-1. In this scenario, however, the upper atmosphere needs to be subjected to a reduced photoionisation and radiation pressure from the star for the model to match the observations.
Conclusions: We confirm the presence of helium in the atmosphere of WASP-107b at high confidence. The helium feature is detected from space and from the ground. The ground-based high-resolution signal brings detailed information about the spatial and dynamical structure of the upper atmosphere, and simulations suggest that the He I signature of WASP-107b probes both its thermosphere and exosphere, establishing this signature as a robust probe of exoplanetary upper atmospheres. Surveys with NIR high-resolution spectrographs (e.g. CARMENES, the Spectromètre infrarouge (SPIRou), or the Near-Infrared Planet Searcher (NIRPS)) will deliver a statistical understanding of exoplanet thermospheres and exospheres through the helium triplet. 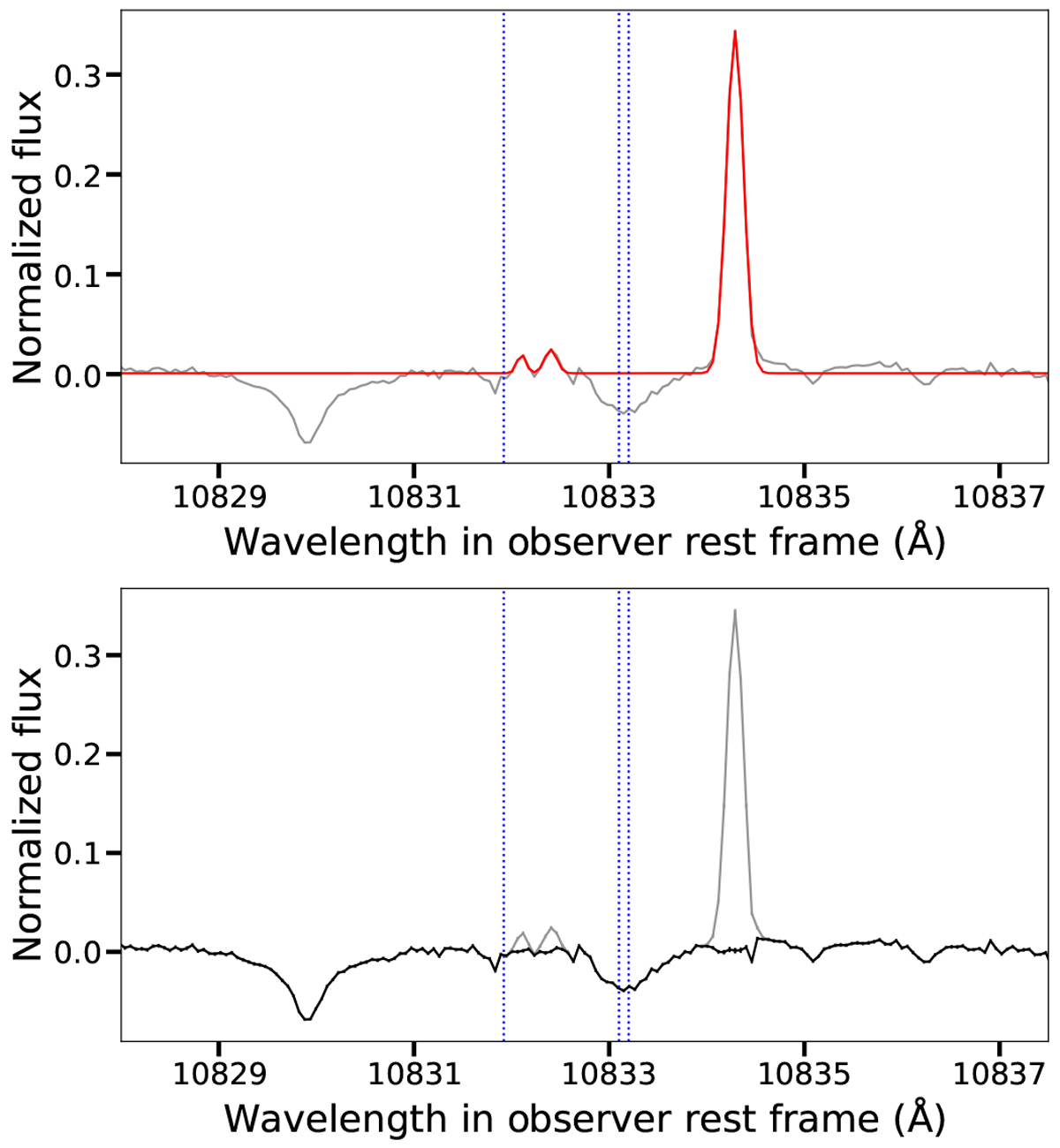