HADES RV program with HARPS-N at the TNG. IX. A super-Earth around the M dwarf Gl 686


Aims: The HArps-n red Dwarf Exoplanet Survey (HADES) is providing a major contribution to the widening of the current statistics of low-mass planets, through the in-depth analysis of precise radial-velocity (RV) measurements in a narrow range of spectral sub-types. Using the HARPS-N spectrograph we reach the precision needed to detect small planets with a few earth masses. Our survey is mainly focused on the M-dwarf population of the northern hemisphere.
Methods: As part of that program, we obtained RV measurements of Gl 686, an M1 dwarf at d = 8.2 pc. These measurements show a dispersion much in excess of their internal errors. The analysis of data obtained within an intensive observing campaign demonstrates that the excess dispersion is due to a coherent signal with a period of 15.53 d. Almost simultaneous photometric observations were carried out within the APACHE and EXORAP programs to characterize the stellar activity and to distinguish periodic variations related to activity from signals due to the presence of planetary companions, complemented also with ASAS photometric data. We used a Bayesian framework to estimate the orbital parameters and the planet minimum mass, and to properly treat the activity noise. We took advantage of the available RV measurements for this target from other observing campaigns. The analysis of the RV composite time series from the HIRES, HARPS, and HARPS-N spectrographs, consisting of 198 measurements taken over 20 yr, enabled us to address the nature of periodic signals and also to characterize stellar physical parameters (mass, temperature, and rotation).
Results: We report the discovery of a super-Earth orbiting at a distance of 0.092 AU from the host star Gl 686. The planet has a minimum mass of 7.1 ± 0.9 M⊕ and an orbital period of 15.532 ± 0.002 d. The analysis of the activity indexes, of the correlated noise through a Gaussian process framework, and of the photometry provides an estimate of the stellar rotation period at 37 d, and highlights the variability of the spot configuration during the long timespan covering 20 yr. The observed periodicities around 2000 d likely point to the existence of an activity cycle.

RV data (Table A.1) and APACHE and EXORAP photometry are only available at the CDS via anonymous ftp to http://cdsarc.u-strasbg.fr (ftp://130.79.128.5) or via http://cdsarc.u-strasbg.fr/viz-bin/qcat?J/A+A/622/A193Based on observations made with the Italian Telescopio Nazionale Galileo (TNG), operated on the island of La Palma by the INAF - Fundación Galileo Galilei at the Roche de Los Muchachos Observatory of the Instituto de Astrofísica de Canarias (IAC); photometric observations made with the APACHE array located at the Astronomical Observatory of the Aosta Valley; photometric observations made with the robotic telescope APT2 (within the EXORAP program) located at Serra La Nave on Mt. Etna. 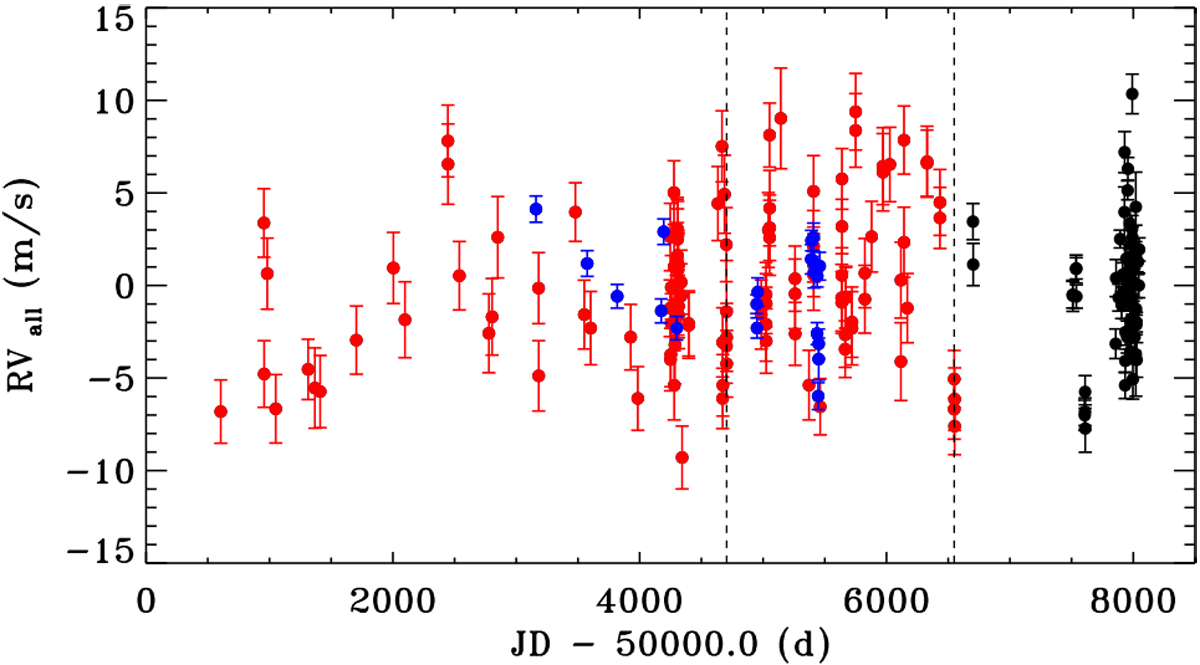