Investigating the presence of two belts in the HD 15115 system

Context. High-contrast instruments like SPHERE (Spectro- Polarimetric High-contrast Exoplanet REsearch) enable spatial resolution of young planetary systems and allow us to study the connection between planets and the dust contained in debris discs by the gravitational influence a planet can have on its environment.
Aims: We present new observations of the edge-on debris disc around HD 15115 (F star at 48.2 pc) obtained in the near-IR. We search for observational evidence for a second inner planetesimal ring in the system.
Methods: We obtained total intensity and polarimetric data in the broad bands J and H and processed the data with differential imaging techniques achieving an angular resolution of about 40 mas. A grid of models describing the spatial distribution of the grains in the disc is generated to constrain the geometric parameters of the disc and to explore the presence of a second belt. We perform a photometric analysis of the data and compare disc brightness in two bands in scattered and in polarized light.
Results: We observe an axisymmetric planetesimal belt with a radius of 2'', an inclination of 85.8° ± 0.7° and position angle of 278.9° ± 0.1°. The photometric analysis shows that the west side is 2.5 times brighter in total intensity than the east side in both bands, while for polarized light in the J band this ratio is only 1.25. We also find that the J-H colour of the disc appears to be red for the radial separations r ≲ 2'' and is getting bluer for the larger separations. The maximum polarization fraction is 15-20% at r 2.5''. The polarized intensity image shows some structural features inside the belt which can be interpreted as an additional inner belt.
Conclusions: The apparent change of disc colour from red to blue with an increasing radial separation from the star could be explained by the decreasing average grain size with distance. The presence of an inner belt slightly inclined with respect to the main planetesimal belt is suspected from the data but the analysis and modelling presented here cannot establish a firm conclusion due to the faintness of the disc and its high inclination. 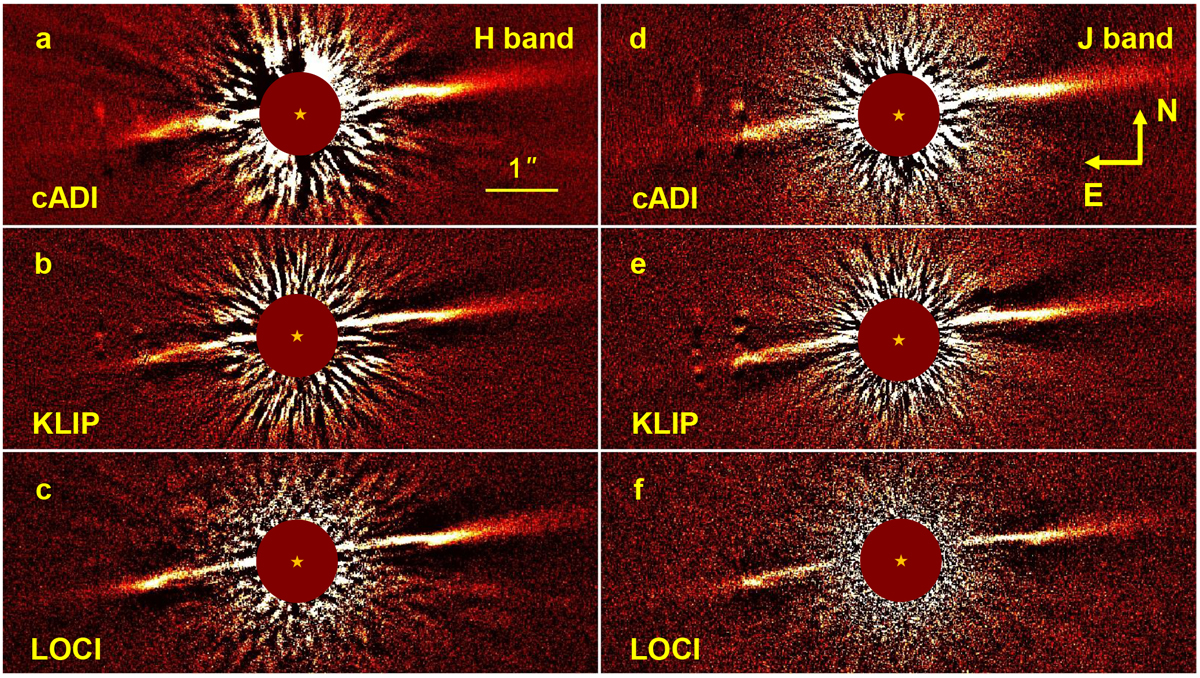