Context. One of the currently favored scenarios for the formation of globular clusters (GCs) with multiple stellar populations is that an initial massive stellar system forms ("first generation", FG), subsequently giving rise to gaseous ejecta which is converted into a second-generation (SG) of stars to form a GC. How such GCs with such FG and SG populations form and evolve, however, remains unclear.
Aims: We therefore investigate, for the first time, the sequential formation processes of both FG and SG stars from star-forming massive gas clumps in gas-rich dwarf disk galaxies.
Methods: We adopt a novel approach to resolve the two-stage formation of GCs in hydrodynamical simulations of dwarf galaxies. In the new simulations, new gas particles that are much less massive than their parent star particle are generated around each new star particle when the new star enters into the asymptotic giant branch (AGB) phase. Furthermore, much finer maximum time step width ( 105 yr) and smaller softening length ( 2 pc) are adopted for such AGB gas particles to properly resolve the ejection of gas from AGB stars and AGB feedback effects. Therefore, secondary star formation from AGB ejecta can be properly investigated in galaxy-scale simulations.
Results: An FG stellar system can first form from a massive gas clump developing due to gravitational instability within its host gas-rich dwarf galaxy. Initially the FG stellar system is not a single massive cluster, but instead is composed of several irregular stellar clumps (or filaments) with a total mass larger than 106 M⊙. While the FG system is dynamically relaxing, gaseous ejecta from AGB stars can be gravitationally trapped by the FG system and subsequently converted into new stars to form a compact SG stellar system within the FG system. Interestingly, about 40% of AGB ejecta is from stars that do not belong to the FG system ("external gas accretion"). FG and SG stellar systems have different amplitudes of internal rotation and V/σ. The mass-density (MSG-ρSG) relation for SG stellar systems can be approximated as ρSG ∝ MSG1.5. There can be a threshold total mass of GC host galaxies (Mth = [5 - 23] × 109 M⊙) beyond which the formation of GCs with compact SG stellar systems is possible. Both the initial baryonic mass fraction and the gas mass fraction in dwarfs are crucial parameters that determine whether or not GCs can contain multiple stellar populations. GCs with compact SG stellar systems are more likely to form in dwarf disks with larger gas mass fractions and higher surface mass densities. Formation of binary GCs with SGs and the subsequent GC merging are clearly seen in some models. The derived external gas-accretion process in FG systems initially consisting of stellar clumps will need to be investigated further in more sophisticated simulations.

The movies are available at http://www.aanda.org 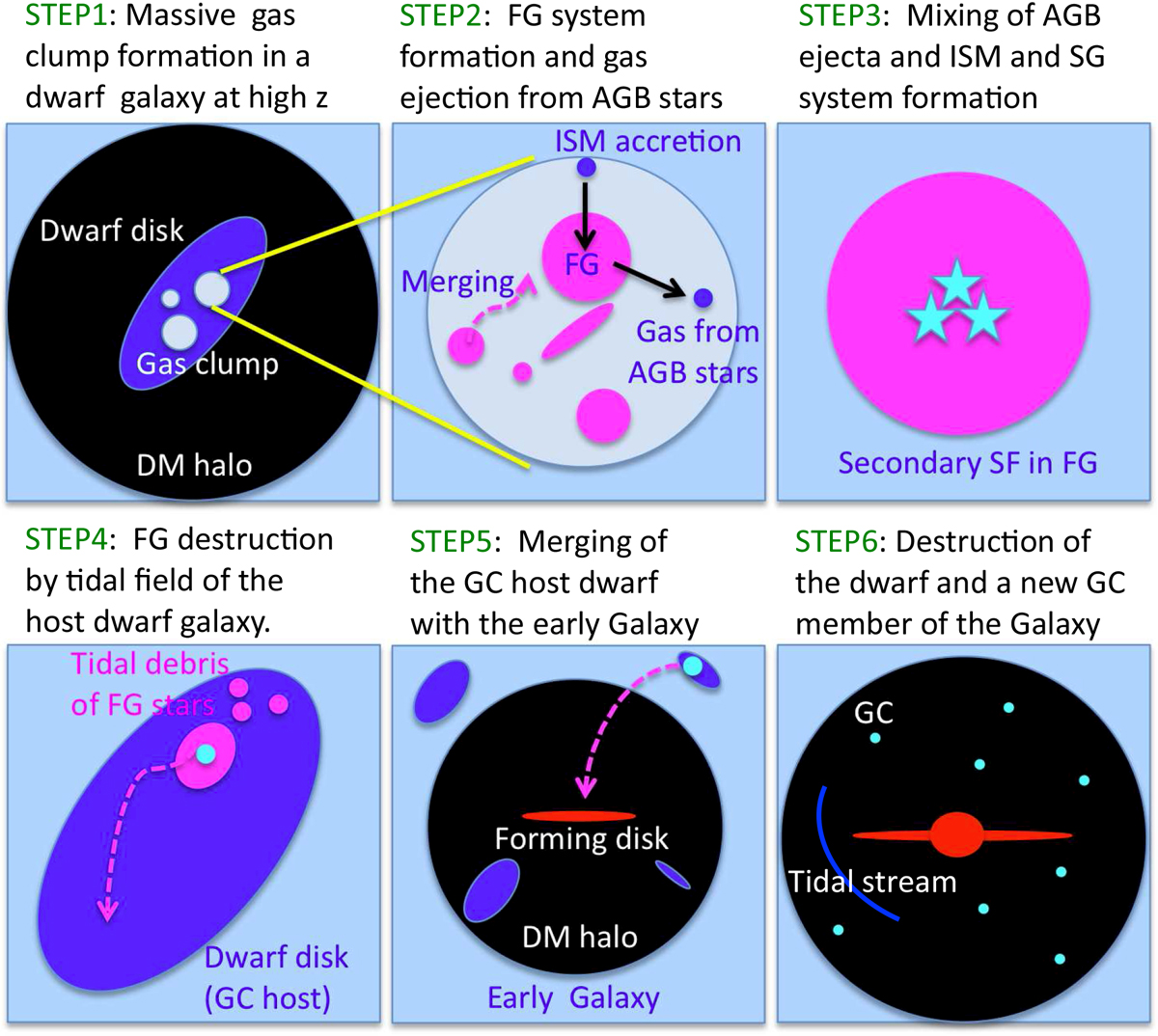