Context. Outflows are one of the first signposts of ongoing star formation. The fastest molecular component of protostellar outflows, extremely high-velocity (EHV) molecular jets, are still puzzling since they are seen only rarely. As they originate deep inside the embedded protostar-disk system, they provide vital information about the outflow-launching process in the earliest stages.
Aims: The first aim is to analyze the interaction between the EHV jet and the slow outflow by comparing their outflow force content. The second aim is to analyze the chemical composition of the different outflow velocity components and to reveal the spatial location of molecules.
Methods: The Atacama Large Millimeter/submillimeter Array 3 mm (Band 3) and 1.3 mm (Band 6) observations of five outflow sources at 0.''3 - 0.''6 (130-260 au) resolution in the Serpens Main cloud are presented. Observations of CO, SiO, H2CO, and HCN reveal the kinematic and chemical structure of those flows. The following three velocity components are distinguished: the slow and the fast wing, and the EHV jet.
Results: Out of five sources, three have the EHV component. The comparison of outflow forces reveals that only the EHV jet in the youngest source, Ser-emb 8 (N), has enough momentum to power the slow outflow. The SiO abundance is generally enhanced with velocity, while HCN is present in the slow and the fast wing, but disappears in the EHV jet. For Ser-emb 8 (N), HCN and SiO show a bow-shock shaped structure surrounding one of the EHV peaks, thus suggesting sideways ejection creating secondary shocks upon interaction with the surroundings. Also, the SiO abundance in the EHV gas decreases with distance from this protostar, whereas it increases in the fast wing. H2CO is mostly associated with low-velocity gas, but, surprisingly, it also appears in one of the bullets in the Ser-emb 8 (N) EHV jet. No complex organic molecules are found to be associated with the outflows.
Conclusions: The high detection rate suggests that the presence of the EHV jet may be more common than previously expected. The EHV jet alone does not contain enough outflow force to explain the entirety of the outflowing gas. The origin and temporal evolution of the abundances of SiO, HCN, and H2CO through high-temperature chemistry are discussed. The data are consistent with a low C/O ratio in the EHV gas versus a high C/O ratio in the fast and slow wings. 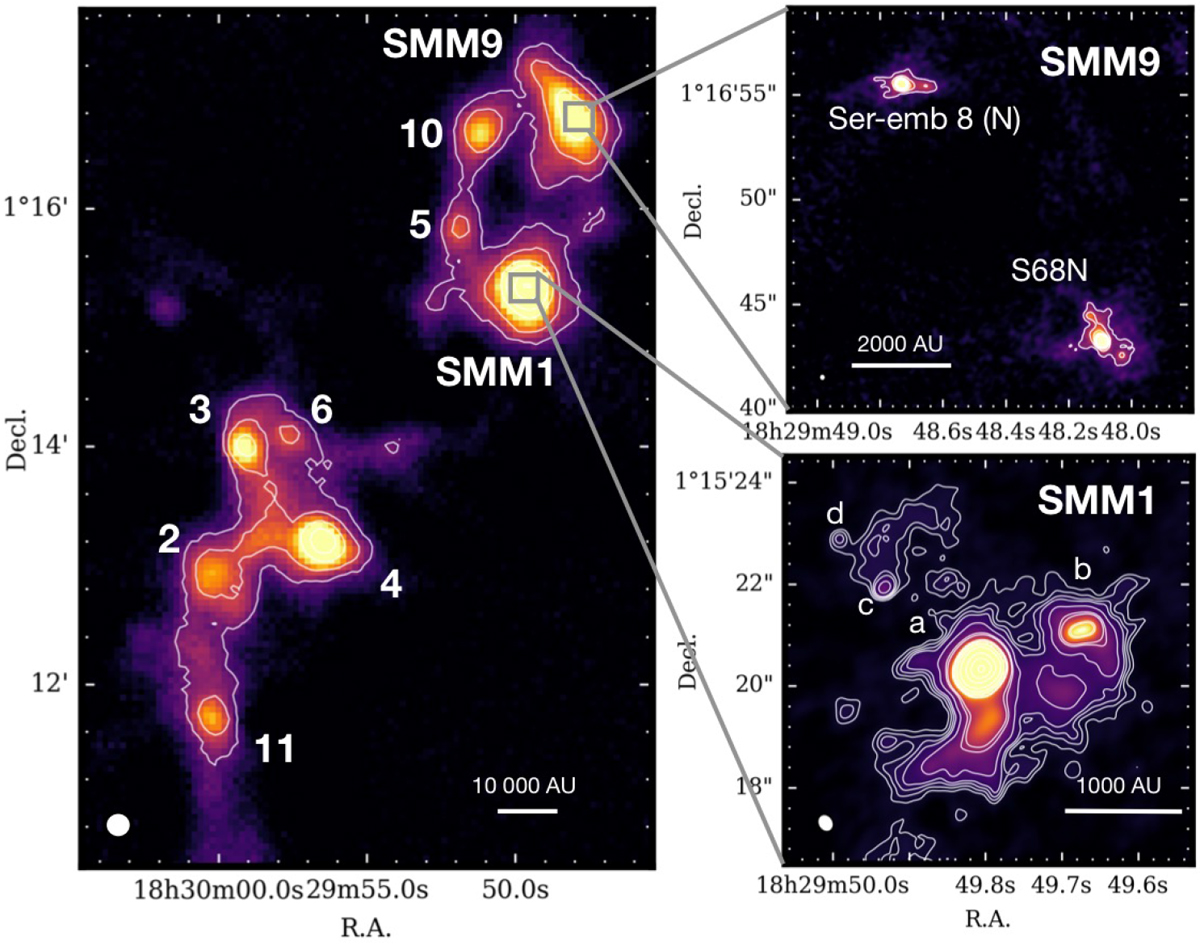