CHANG-ES. XVI. An in-depth view of the cosmic-ray transport in the edge-on spiral galaxies NGC 891 and NGC 4565

Context. Cosmic-ray electrons (CREs) originating from the star-forming discs of spiral galaxies frequently form extended radio haloes that are best observable in edge-on galaxies, where their properties can be directly investigated as a function of vertical height above the disc.
Aims: For the present study, we selected two nearby edge-on galaxies from the Continuum Halos in Nearby Galaxies - an EVLA Survey (CHANG-ES), NGC 891 and 4565, which differ largely in their detectable halo extent and their star-formation rates (SFRs). Our aim is to figure out how such differences are related to the (advective and/or diffusive) CRE transport in the disc and in the halo.
Methods: We use wide-band 1.5 and 6 GHz Very Large Array (VLA) observations obtained in the B, C, and D configurations, and combine the 6 GHz images with Effelsberg observations to correct for missing short spacings. After subtraction of the thermal emission, we investigate the spatially resolved synchrotron spectral index distribution in terms of CRE spectral ageing. We further compute total magnetic field strengths assuming equipartition between the cosmic-ray (CR) energy density and the magnetic field, and measure synchrotron scale heights at both frequencies. Based on the fitted vertical profiles of the synchrotron intensity and on the spectral index profile between 1.5 and 6 GHz, we create purely advective and purely diffusive CRE transport models by numerically solving the 1D diffusion-loss equation. In particular, we investigate for the first time the radial dependence of synchrotron and magnetic field scale heights, advection speeds, and diffusion coefficients, whereas previous studies of these two galaxies only determined global values of these quantities.
Results: We find that the overall spectral index distribution of NGC 891 is mostly consistent with continuous CRE injection. In NGC 4565, many of the local synchrotron spectra (even in the disc) feature a break between 1.5 and 6 GHz and are thus more in line with discrete-epoch CRE injection (Jaffe-Perola (JP) or Kardashev-Pacholczyk (KP) models). This implies that CRE injection time-scales are lower than the synchrotron cooling time-scales. The synchrotron scale height of NGC 891 increases with radius, indicating that synchrotron losses are significant. NGC 891 is probably dominated by advective CRE transport at a velocity of ≳150 km s-1. In contrast, NGC 4565 is diffusion-dominated up to z = 1 kpc or higher, with a diffusion coefficient of ≥2 × 1028 cm2 s-1.

Reduced images (FITS) are only available at the CDS via anonymous ftp to http://cdsarc.u-strasbg.fr (ftp://130.79.128.5) or via http://cdsarc.u-strasbg.fr/viz-bin/cat/J/A+A/632/A12 Based on observations with the 100-m telescope of the Max-Planck-Institut für Radioastronomie (MPIfR) at Effelsberg and the Karl G. Jansky Very Large Array (VLA) operated by the NRAO. The NRAO is a facility of the National Science Foundation operated under agreement by Associated Universities, Inc. 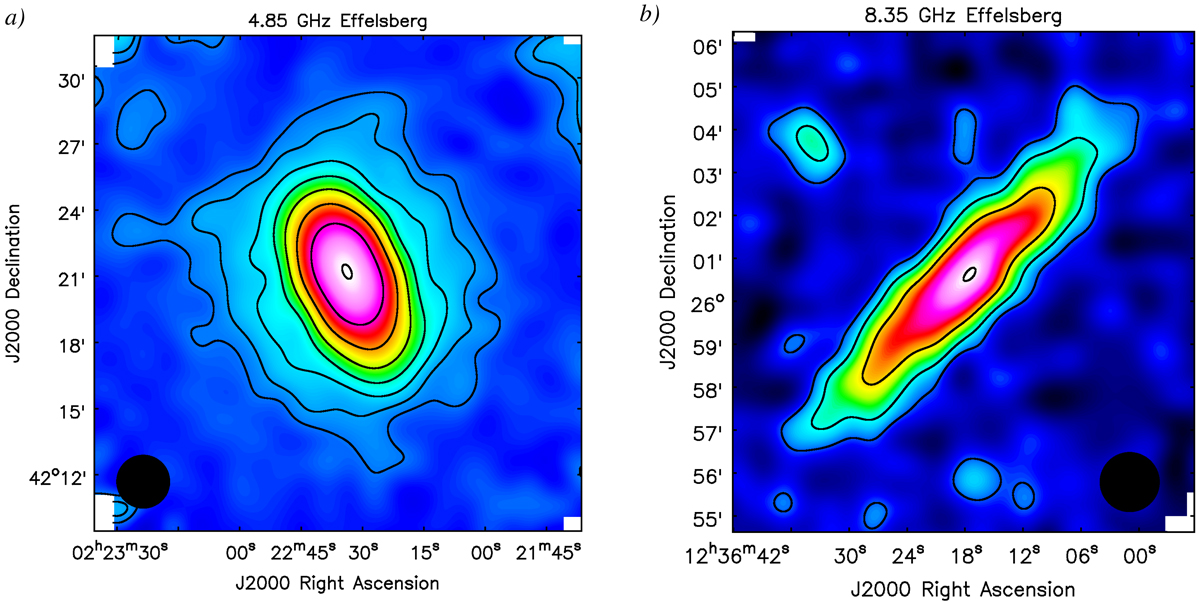