Context. Main belt comets (MBCs) are a peculiar class of volatile-containing objects with comet-like morphology and asteroid-like orbits. However, MBCs are challenging targets to study remotely due to their small sizes and the relatively large distance they are from the Sun and the Earth. Recently, a number of weakly active short-period comets have been identified that might originate in the asteroid main belt. Among all of the known candidates, comet 66P/du Toit has been suggested to have one of the highest probabilities of coming from the main belt.
Aims: The main goal of this study is to investigate the physical properties of 66P via spectroscopic and imaging observations to constrain its formation conditions. In particular, the isotopic abundance ratio and the ortho-to-para ratio (OPR) of gaseous species can be derived via high-resolution spectroscopy, which is sensitive to the formation temperature of the nucleus.
Methods: We obtained medium and high-resolution spectra of 66P from 300-2500 nm with the X-shooter and the UVES instruments at the Very Large Telescope in July 2018. We also obtained a series of narrow-band images of 66P to monitor the gas and dust activity between May and July 2018 with TRAPPIST-South. In addition, we applied a dust model to characterize the dust coma of 66P and performed dynamical simulations to study the orbital evolution of 66P.
Results: We derive the OPR of ammonia (NH3) in 66P to be 1.08 ± 0.06, which corresponds to a nuclear spin temperature of 34 K. We compute the production rates of OH, NH, CN, C3, and C2 radicals and measure the dust proxy, Afρ. The dust analysis reveals that the coma can be best-fit with an anisotropic model and the peak dust production rate is about 55 kg s-1 at the perihelion distance of 1.29 au. Dynamical simulations show that 66P is moderately asteroidal with the capture time, tcap 104 yr.
Conclusions: Our observations demonstrate that the measured physical properties of 66P are consistent with typical short-period comets and differ significantly from other MBCs. Therefore, 66P is unlikely to have a main belt origin. 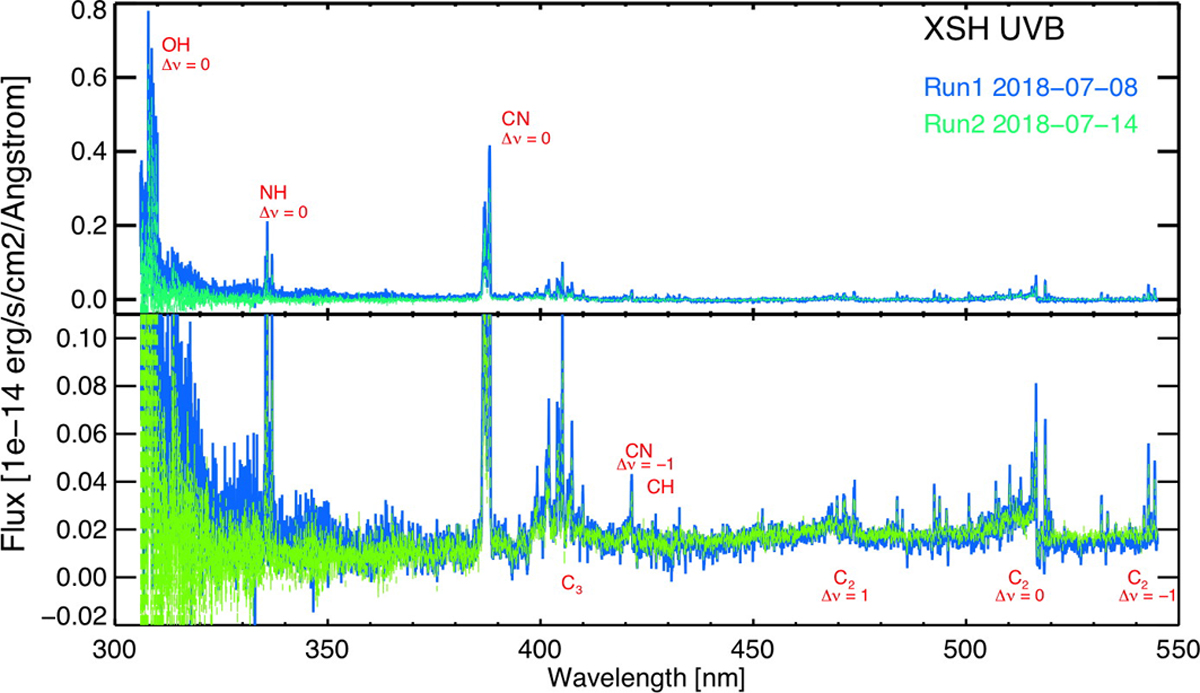