Context. Supersonic disordered flows accompany the formation and evolution of molecular clouds (MCs). It has been argued that this is turbulence that can support against gravitational collapse and form hierarchical sub-structures.
Aims: We examine the time evolution of simulated MCs to investigate: What physical process dominates the driving of turbulent flows? How can these flows be characterised? Are they consistent with uniform turbulence or gravitational collapse? Do the simulated flows agree with observations?
Methods: We analysed three MCs that have formed self-consistently within kiloparsec-scale numerical simulations of the interstellar medium (ISM). The simulated ISM evolves under the influence of physical processes including self-gravity, stratification, magnetic fields, supernova-driven turbulence, and radiative heating and cooling. We characterise the flows using velocity structure functions (VSFs) with and without density weighting or a density cutoff, and computed in one or three dimensions. However, we do not include optical depth effects that can hide motions in the densest gas, limiting comparison of our results with observations.
Results: In regions with sufficient resolution, the density-weighted VSFs initially appear to follow the expectations for uniform turbulence, with a first-order power-law exponent consistent with Larson's size-velocity relationship. Supernova blast wave impacts on MCs produce short-lived coherent motions at large scales, increasing the scaling exponents for a crossing time. Gravitational contraction drives small-scale motions, producing scaling coefficients that drop or even turn negative as small scales become dominant. Removing the density weighting eliminates this effect as it emphasises the diffuse ISM.
Conclusions: We conclude that two different effects coincidentally reproduce Larson's size velocity relationship. Initially, uniform turbulence dominates, so the energy cascade produces VSFs that are consistent with Larson's relationship. Later, contraction dominates and the density-weighted VSFs become much shallower or even inverted, but the relationship of the global average velocity dispersion of the MCs to their radius follows Larson's relationship, reflecting virial equilibrium or free-fall collapse. The injection of energy by shocks is visible in the VSFs, but decays within a crossing time. 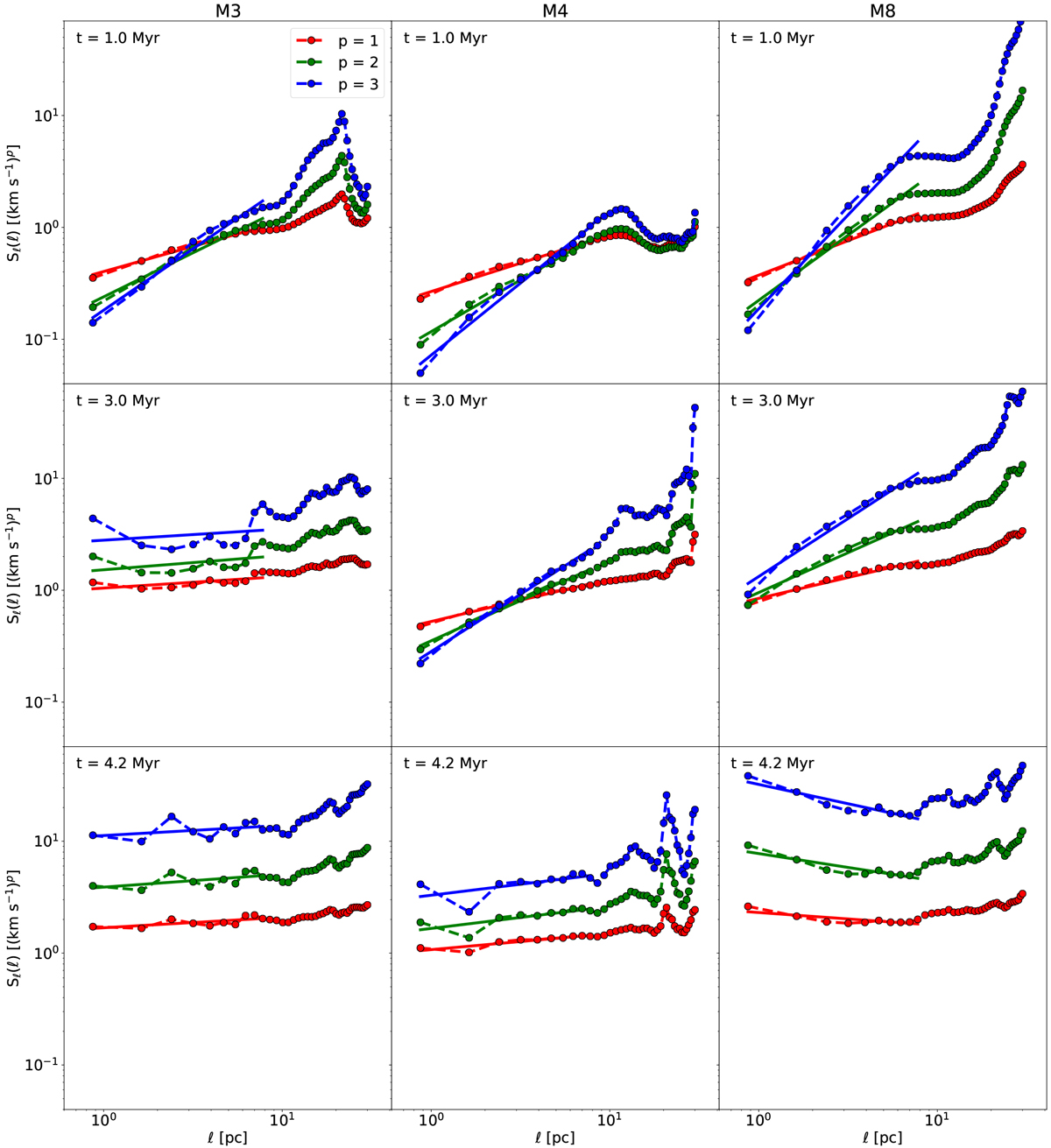